Today locals pulled out their “stiavali” wading boots to navigate in the low lying areas. Piazza San Marco is one of the lowest points in Venice.

The forecast for 105cm Saturday morning (3.44 feet above sea level) so MOSE was not activated. It is currently programmed to be used only above 110cm. Above you see the walkways setup for foot traffic. Unless you have your wading boots, these come in handy.

The water does not come in as waves, though some waves do arrive, it comes in quietly as the underground saturates and bubbles up beginning at about 82cm of tide.

The tide values are indicated in centimetres and have as reference (zero) a level established in 1897. Since the walkable ground of Venice doesn’t unfold on a homogeneous plane, the same tidal event occurs in different points of the city in a variable way, depending on the height of the streets. 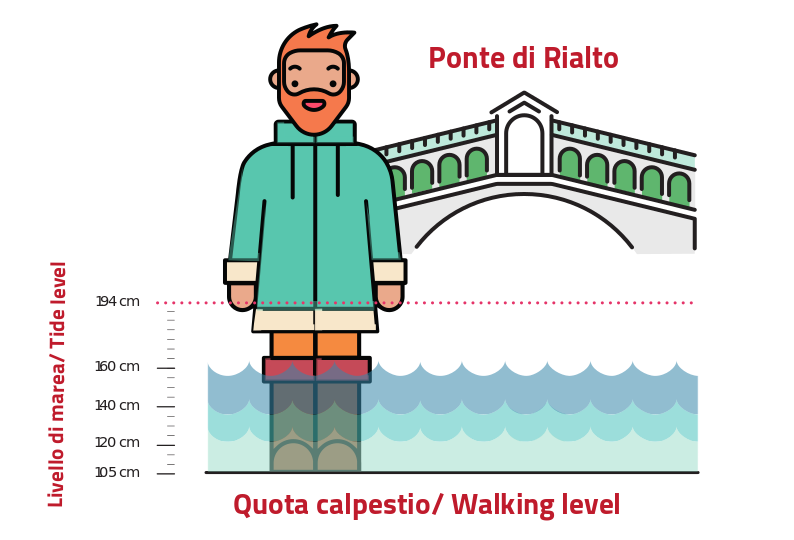 For example, in Piazza San Marco, one of the lowest areas of Venice, high water begins when the height of the tide is greater than 82 centimetres. If the tide level rises up to 105 centimetres, the area of the Rialto Bridge also begins to flood; while in the square in front of the railway station, 135 centimetres of tide are needed for the water to touch the walking level. Other areas of the city are even higher.

When the tide level above 140 centimetres it is considered exceptional. The week before Thanksgiving, Venice saw 180cm but MOSE kept the city mostly dry. Venice has 2 high tides each day and 2 low tides so the max high tide only last a couple hours. The tide comes in slowly and reaches its peak, then leaves in the same way. The big problem occurs when the wind from the south (Sahara) is blowing strong preventing the water from going out on the low tide and adding a second high tide on top of the existing tide.

With the addition of the new barriers around the Basilica San Marco, the water today did not enter the basilica.

← Festival of the Madonna della Salute