Have you ever eaten this sumptuous Italian desert, usually served after way too much food? It’s literal translation Tira mi su is “pick me up”! There are various stories on who first made this famous desert. It is generally credited to the Veneto Region, though many claim it as their own. Well, now, if the petition goes through, we can all point to Ada Campeol, the owner of the restaurant “Al Beccherie” in Treviso and the chef Roberto Linguanotto.
The President of the Veneto Region will ask for recognition of this dish. because it is “at the rish of having too many fathers and too many recipes that do not do justice to the inventiveness and commitment of the place it was born” (Luca Zaia, who was the former Minister of Agriculture). 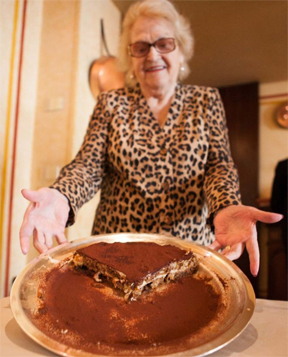 A Definite Pick Me Up!

Others who have claimed ownership of this delightful sweet have been documented by the Washington Post citing Carminantonio Iannaconne as the creator, again in a restaurant in Treviso in the same period (maybe a little copy cat?). While other sources have given credit to pasticceria in the city of Siena who were said to have created it in honor of the Grand Duke of Tuscany. Now since he died in 1723, we can’t ask him to verify this, so I’m going with Ada and the locals over any newspaper report!
The Region of Veneto is proceeding to officially end this nonsense once and for all by having an executive order give it’s authenticity to Ada! Brava! Buono! e Mangiamo!
According to Ada, it was created for her to give her a burst of energy while coping with a newborn. (Now that probably wouldn’t go so well with today’s parental guide and I am not recommending it, but a good shot of Marsala in the zabaglione and espresso certainly provided Ada a ‘pick me up’.)
Here’s the recipe from Antico Ristorante Beccherie as published in 1981 in an issue of Vin Veneto magazine – minus the Marsala.  It prepares a really large desert as you might expect in a restaurant.
Note that it uses raw eggs, we recommend you use from a known source that guarantees salmonella-free eggs. Or search on line for a cooked zabaglione recipe, most will require Sweet Marsala.
First make the espresso and mix with about 1/4 cup of the sugar, set aside for it to cool. Whatever you do, don’t repeat my mistake, while helping prepare Christmas dinner in Italy at a Renata’s house, of dumping the left over Marsala and Espresso over the Tiramisu. I was banished from the kitchen, but it was a very happy dinner table.

Antico Ristorante Beccherie is located in Treviso on the Piazza Ancillotto, #11. They are closed on Sunday nights and Mondays.
Treviso is a short train or bus ride from Venice and is a beautiful old walled city with a bustling Saturday morning market.
If you have a favorite Tiramisu recipe, you can post for everyone.
Update:
Treviso is planning a Tiramisu for the Guinness Book of World Records.. They are proposing to make a 100 meter dessert to serve in Piazza dei Signori. The proceeds will go to charity. This comes on top of the move to claim the DOP (Protected Designation of Origin).

3 comments for “Tiramisu a Veneto Tradition”