There are definitely some times when gps and technology fail you and common sense would be an asset. The scene this week in Venice, at Piazzale Roma, the end of the line for autos, was one of those. An Austrian tourist arriving by car, a Cinque Cento (Fiat 500), made a wrong turn just in front of the Bus ticket office, down the steps (yes the steps) landing on the Fondamenta which runs along the canal where you catch the vaporetta (boat).

But the TomTom said turn left!

Apparently he not only arrived there, but proceeded down the Fondamenta (the walkway along the canal) in front of the COOP (grocery store) the Post Office and to the corner where you catch the 4.1 or 4.2 (also known as GiraCittá). He turned around and was headed back when he was apprehended by the local Police.

The picture shows the car as it headed down path, just by the boat stop where you catch the #2.

He said he was disoriented, and was frantically searching his TomTom (navigation) to find a way out. He got a little more help than he planned.

Sure I can pick you Up!

Polo takes a ride in Venice:

It is not the first time an impaired motorist has arrived in Venice, a young local from nearby Jessola, who wanted to party with his friends in Venice and told them he would pick them up.. Still on youtube is the remarkable video of a Polo whose owner not only made the same turn for continued for some distance.. 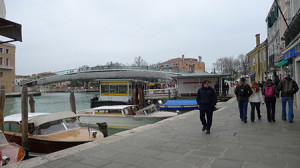 The Calvatrata Bridge and the Fondamenta

He went over the the Calvatrava (Constitution) bridge, a bridge with glass steps. It must have been quite a bumpy ride, but he was not deterred. He continued along in front of the train station, through the narrow street and ended up in the Campo (square) San Geremia where he stopped because the passage way became so narrow.  (Watch the Youtube video – from the video surveillance of the train station, the action happens in the last few seconds.) The police impounded the car and it went by barge on the return trip. 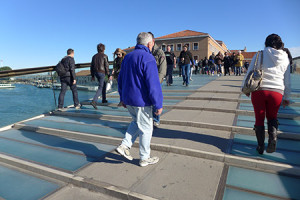 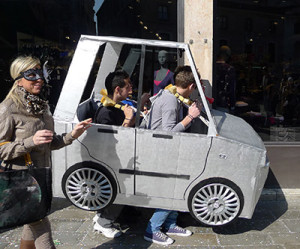 The Polo became a hit at Carnevale with locals.

Local teens made great fun of this mishap by creating their own Polo for Carnevale where they entertained all the locals with their charade of the event.

He was not charged with any driving offense, because oddly enough, there was no law on the books which said you could not drive a car in Venice.  Guess no one ever thought about that!