One Entrance into the Ghetto, Venezia

On March 29, 1516 Doge of Venice, Leonardo Loredan signed the decree creating the Ghetto among the small islands in the area now known as Cannaregio. The commemoration is a tribute to the relationships betweens the Jews in the fibre of society in Venice and the important contributions. Venice has forever been a melting pot, one need only look at the architecture of its churches and palazzi. 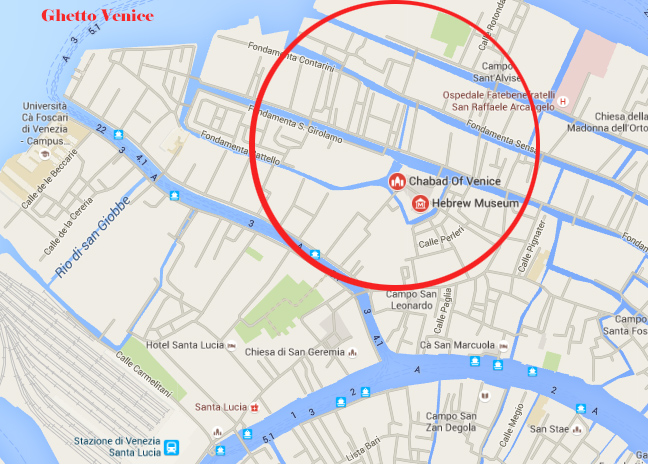 The Ghetto is in the Cannaregio Sestiere of Venice, one of the less touristy area, most likely not particularly attractive in 1516. Today it is a sought after area, convenient to the train station, Piazzale Roma, the airport and Murano. Last visit, I stayed in the heart of this area enjoying the bakeries, the bars and the children playing in the square.

Venice’s nature as a trade based society gave little voice to excluding any useful people. The Venetians willingly traded with their enemies as well as friends. Though, the early settlement of the Jewish merchants and moneylenders (1252) was allowed only on Giudecca (called Spinaulunga). They received permission to settle in the city in 1385. Their doctors were sought by the wealthy in Venice as were the skills of the jewelry makers and printers.

The history has not been entirely without prejudice as the Senate expelled the moneylenders in 1394 and forced those left to wear a yellow badge, later (1496) a yellow hat which was changed to a red hat in 1500. They were precluded from owing land or building a synagogue.

Despite these hardships, the culture thrived in many ways. the first Italian printer, Aldo Manuzio (1449 – 1515) used Hebrew fonts in his books. Jewish publishing companies thrived until the early 19th century.

With the decree of the Doge in 1516, the Jews were allowed to remain in Venice, but confined to Ghetto Nuova, a small island in what is now known as Cannaregio. In fact the word “ghetto” is from the Italian getto which means casting or geto in Veneziano, meaning “foundry”. Obviously “ghetto” has taken a new meaning in the US.

To accommodate the population in the small space allotted to them, they built the tallest buildings found in Venice, even today!

The Venetian Ghetto was made famous by Shakespeare’s The Merchant of Venice and as part of the special events will the first ever performance of the important play. The performance will be held in the Ghetto, appropriately where it was set. This year also marks the the 400th anniversary of the death of Shakespeare. For more information visit the site The Merchant in Venice.

Other sources for information.

This is but a small snapshot of the story of the Ghetto, well worth the reading and seeing, as any story 500 years in the making.

Video Story of the Ghetto

The locals are quick to point out that this is a remembrance, not a celebration. But it is also a tribute to Venice’s multi-cultural population living together.

← So 3 million, 5 million, what would Venice be without the Rialto Bridge?
Venice on Sale – 82 Million Euro Needed →