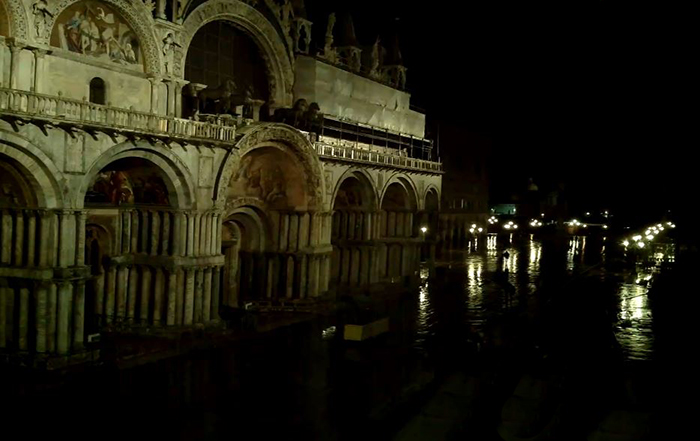 MOSE to the Rescue,

Thursday 15 October 2020 the MOSE gates were raised for the second time with 135cm expecting 135cm high tide. And it worked! In Piazza San Marco there was only few centimeters of water.

Venice’s long awaited defense against high water had a successful trial against 130cm earlier in October 2020. We could say the one bright spot in 2020 for Venice. It gave hope to Venetians that the gates which performed well in ideal conditions could also help when there are high winds, multiple high tides in the same day.

Consider that the lowest point in Venice is at +64cm right in front of the Basilica San Marco. The water arrives through not from the overflow against the fondamenta (the sea wall) but begins bubbling up through the very system that carries the water out of the Piazza. So when the high water is at 130cm, then there is the potential for significant flooding in Piazza San Marco. The good news is always that the high tide last for just a few hours.

Much of Venice is on a level between 110cm and 140cm. And the height of the tides is measured at the Punta della Salute near the Basilica di Santa Maria della Salute in front of San Marco. So the trial was not a a “alta marea eccezionale” when the height exceeds 140cm. And as it turns out, Venice will not raise the gates when the tide is below 130cm. It may be that the gates need the pressure of a high tide to aid in their rise. Many Venetians clearly feel this is a mistake, since at 129cm 45% of Venice is wearing boots and water has entered many homes and businesses. 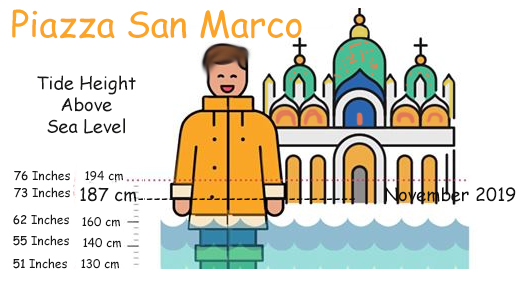 It has been a long and very rocky road to this successful trial considering that the construction project began in 2003 (with engineering that preceded this date by many years). MOSE is an Italian acronym for MOdulo Sperimentale Elettromeccanico (Experimental Electromechanical Module) as well as a tongue-in-cheek reference to Moses, who parted the Red Sea. The project was derailed in 2014 when it was discovered that taxpayer money had been evaporated to line the pockets of politicians, contractors and many others along the chain. In 2014, 35 people, including Giorgio Orsoni, the Mayor of Venice, were arrested in Italy on corruption charges in connection with the MOSE Project. Orsoni was accused of receiving illicit funds from the Consorzio Venezia Nuova, the consortium behind the construction of the project, which he then used in his campaign to be elected mayor. There were allegations that 20 million euros in public funds had been sent to foreign bank accounts and used to finance political parties.

The high tides are caused by a combination of various factors, such as the astronomical tide of which Venice has 2 lows and 2 highs each day, low pressure on the Tyrrhenian Sea (to the west coast of Italy), strong south wind (scirocco) and the Adriatic seiche (a disturbance or oscillation in the water level caused by changes in atmospheric pressure). Further a larger irreversible phenomena also contributes to increase the water level in Venice, namely the loss of about 23 centimeters in the last century. 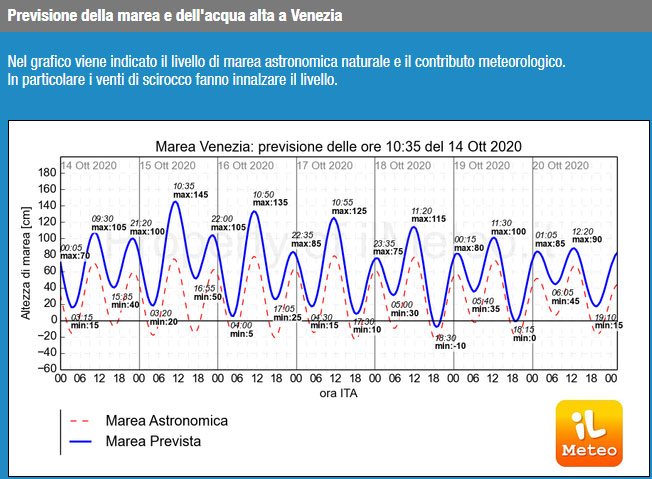 Every Venetian knows how to read these charts. And there is an app that will let you know as well when a high tide is expected. Above 140cm, a very frightening siren blasts to let you know, and it will wake you from your deepest sleep. The unforeseen in these charts is what happened on 19 November 2020 and in 1964 when instead of the water flowing out (low tide), the winds and atmospheric pressure kept the water inside, so when the next cycle of tides arrived, the tide went on top of a high that had not receded. In theory if MOSE works, this could prevent the kind of disaster we saw in 2019.

There are 78 gates and all need to function. Venice is first and foremost a city whose transportation depends on boats. The local officials have to stop all boat traffic, large container ships, small fishing vessels, ships carrying oil to Marghera have to be stationed outside the gates. Then they begin the mechanical raising of the gates. A engineering feat!

Below the surface is a tunnel to maintain the gates, which is of course a huge maintenance program costing millions, though since it has not been operational, the numbers are still being evaluated. The current estimate of MOSE cost of construction is €5.496 billion, but for those of us who love Venice….it is a small price to pay. 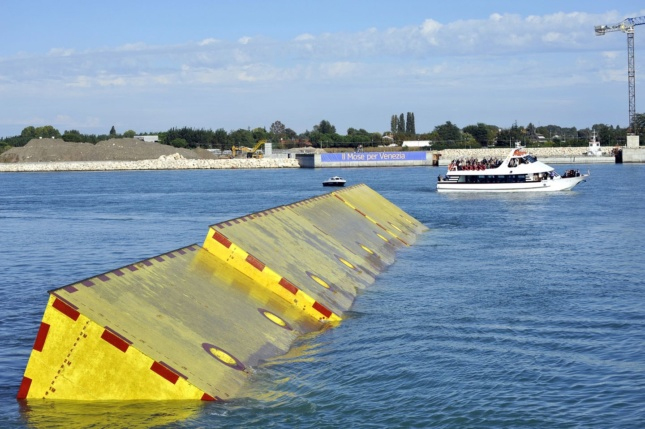 MOSE Gates in test with Tour Boat in distance. During MOSE actual functioning, no boats can come in or go out.

https://en.wikipedia.org/wiki/MOSE_Project  This one explain how it works.

For a historical view of what happened in 1966, enjoy this youtube vido.