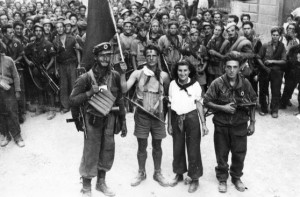 April 25 marked the 70th anniversary of the Liberation of Italy. There are parades on all the islands and towns around the lagoon as locals recall this important day in the history of Italy and Europe. Admittedly, each year there are fewer of those who participated. Laurel Wreaths are laid on the monuments to World War II and it’s soldiers. In San Marco Square there is a big celebration paying tribute to the Italian Resistance. 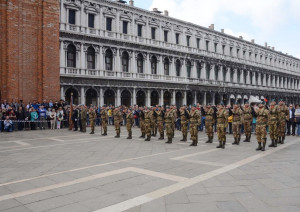 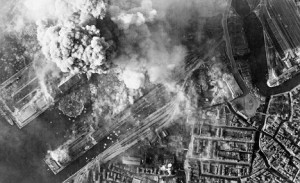 By 1943, Venice’s shipyards had become an important avenue for supplies and troops of the Axis powers’ logistics chain when the railways and roads in northern Italy has been damaged. The Allies needed to destroy this pipeline and Venice was in the crosshairs. But Venice was spared damage to the city by RAF Group Captain George Westlake* of the RAF in the “Operation Bowler” in March of 1945 in a Kittyhawk fighter plane when he led more than 100 Allied fighter bombers in a sortie attacking the German ships lying in the harbor of Venice. Not only were they successful, but also they were able to destroy the underwater training facility for frogmen and two-men submarines. He and his operation were so accurate that the only damage in Venice were a few cracked windows and Captain Westlake took great pride in this feat as he fear that the Italians would never forgive damage to their beautiful city! Venetians climbed on their roofs to cheer on the attack. That Venice was not bombed we are all grateful!

Since there was no internet, email or cell phones the news of the Liberation reached Venice some 3 days after the declaration by the war powers while the newspapers continued to report that war raged!

A Venetian friend remembers the occupation, but more importantly the day, the American soldiers arrived. Her most vivid memory as a child in 1945 is the chocolates the soldiers gave her. In her words, she remembers not only the chocolate, but exactly how it tasted! You might say a “sweet moment” and the kindness of the troops won the heart of this young girl.

Furnaces Closed – The Women Carried On

Murano and Venice were not exempt from the difficulties with most of the men who worked in the furnace sent off to war, the furnaces closed and the future of the glass industry was in doubt. The women, like all over the world, carried on and survived on the conterie industry (seed bead). And as they always say in Venice. Dobbiamo andare avanti!  We must go forward. 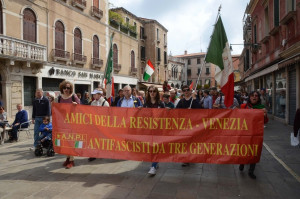 Images are courtesy of NuovaVenezia, Il Gazzettino and Wikipedia

*Group Captain George Westlake died at 87 and had received 11 Medals for his service with the RAF, including the Distinguished Flying Cross and the Distiguished Service Order

← Rialto Bridge Gets a DIESEL Update
Update from Venice →

2 comments for “70th Anniversary of the Liberation of Venice”