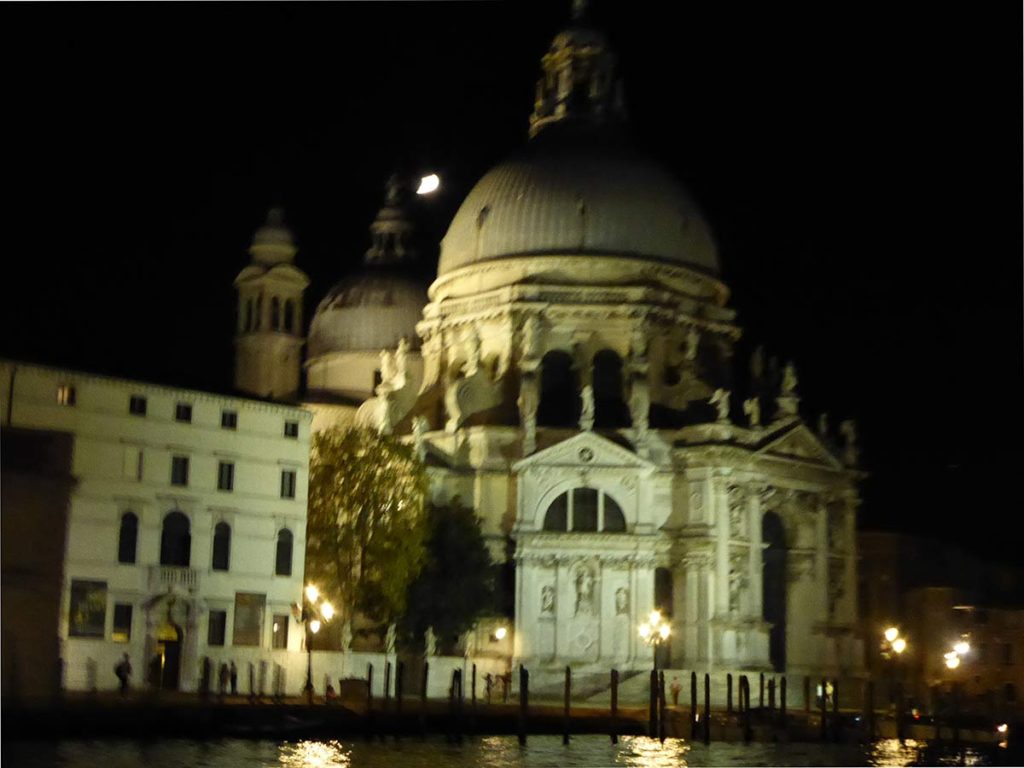 When I wrote this post in 2018, I had no idea how the “End of the Plague” could be so relevant. And yet today, we sincerely all wish for the end of our current plague – known as COVID19. And the similarities are eerie to our current world wide pandemic. Venice was a major trade center between the east and west. And most likely the plague arrived on one of those ships laden with the goods that wealthy Europeans wanted. And yet, even in those days they realized the importance of isolating the sick and even the ships which arrived for 40 days, which is the origin of our word quarantine (from quaranta). They also had some idea of how the disease spread. Evidence of that is abundantly clear in the clothing and masks that the doctors wore and today’s Personal Protection Equipment (PPE) has amazing similarities…just updated for science as we know it today. But the Venetians were not far off.. 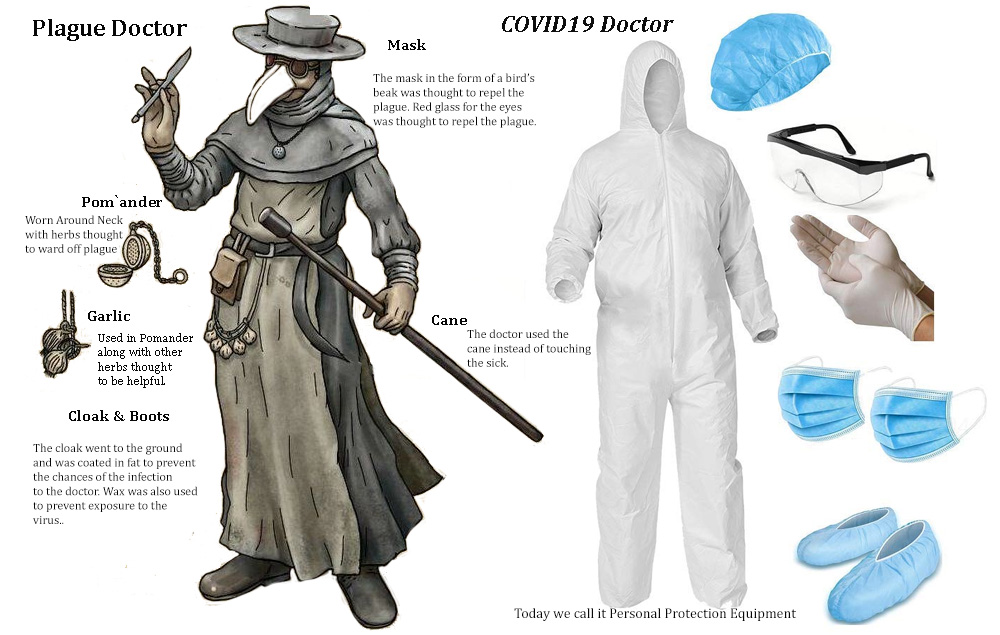 Today (21 November) the faithful Venetians are celebrating the end of the Plague but that of 1630 and no doubt many of the candles burning today are also for the sincere hope that the plague known to us as COVID will end soon. This year no pontoon bridge was erected and fewer people ventured out for the service given the rise of cases in Venice.

This beautiful church was built by the Doge Nicolo Contarini, at least it’s construction was begun by him. The plague of 1630 killed some 47,000 Venetians and through the lagoon some 94,000 died. This was about 1/3 of the population. The Doge sought help in the Virgin Mary to end the plague for the citizens. He remembered the building of the Redentore church in the previous plague (1575-76) when the Doge asked Palladio to design the Church of the Redentore. So he promised that he would build a church to honor the Virgin Mary if the plague was ended. It is kind of the Venetian Thanksgiving. 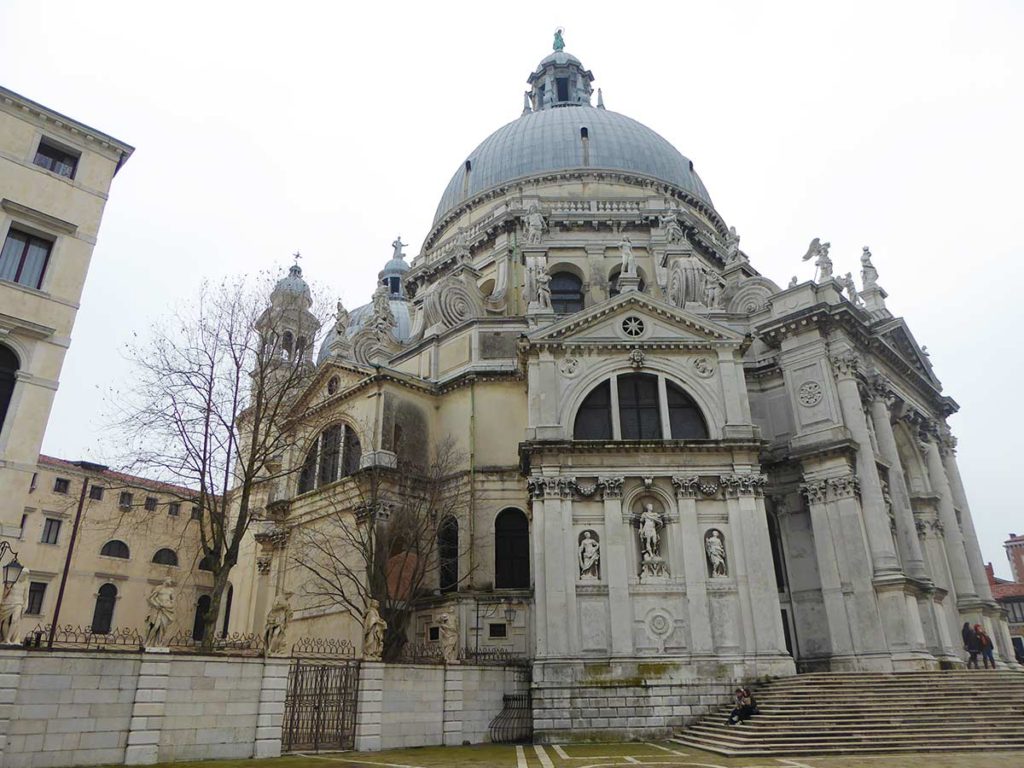 The plague did end and even though the Doge himself died a victim of the plague, his promise was carried out. A competition was held and the winning design was the 26 year old Baldassare Longhena. It was built on a platform of 1 million wooden piles and constructed in Istrian stone (like much of Venice). It was finally completed in 1681. And since it’s consecration, each year on November 21, the Festa della Madonna della Salute is held with the city’s officials parading to the church for a service of gratitude. 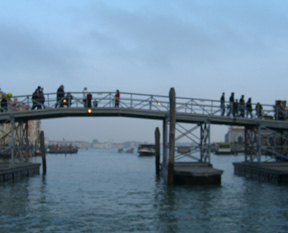 Now as for hundreds of years, Venetians celebrate the Festa della Madonna della Salute with families in procession to the church to light candles and pray for their health in the coming year. Even gondolieri bring their oars to be blessed as well. 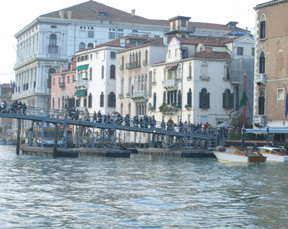 Entrance on San Marco Side

A temporary pontoon bridge is constructed from near Piazza San Marco across the Grand Canal so that the pilgrims can walk over (as the number of people who want to visit would overwhelm the vaporetto system). This is no small feat, though it is erected in a few short days and it is disassembled the day after the celebration. Personally, I have always wondered where they store these enormous pieces, but I believe it is at the Arsenale which is a vast complex. (It is like clockwork and they also assemble a pontoon bridge to the Church of the Redentore for that celebration – 3rd Sunday of July.) 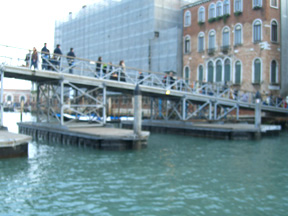 In the small streets arriving to the bridge there are vendors selling candles which you can light inside. Inside the church the altar boys take you candles, helping you light them. Then you proceed to the sanctuary. It is a working church with a congregation. It houses an enormous wealth of original artwork from some of Venice’s most famous painters, like Tintoretto and Titian. 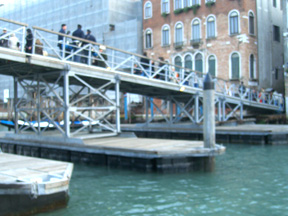 It is a happy, yet solemn procession as families greet each other and remember the history of their beloved city.

← MOSE Parting the Water (sort of)
Venice Searching for Customers →