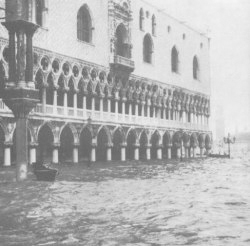 November 4 marks 50 years since the devastating Acquagranda (high tide) of 1966. The high tides were the result of heavy rainfall in the Veneto and the runoff which flowed into the lagoon and a scirocco with high winds. These winds kept pushing the tides into the lagoon and while there are 2 high tides and 2 low tides each day, the low tides simply never occurred and each incoming tide resulted in higher water levels.

The highest tide reached 1.94 Meters (194 Centimeters) of 6.36 Feet above sea level. For an idea of how much of Venice was impacted:

Percentage of the whole Venice Surface under water depending on the tide level:

The water remained for 3 days displacing about 5,000 people, mostly people who lived on the ground floor. As a result, ground floors of the buildings were abandoned for housing. 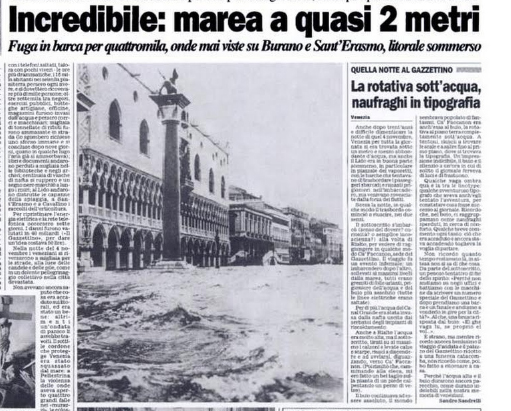 I asked some of our suppliers to tell us what they remember from 1966.

Giorgio lived on the second floor of a house also near San Marcuola. He was sick and stayed at home. He looked our the second floor window to see his father with his older brother on his shoulders wading through the water to take bring him home.

Valeria lives in Murano where the water did it’s damage to the furnaces and the livelihoods of hundreds. The 4th of November, with the water at it’s highest, it began to crest the furnaces. The cold water popped and crackled as it encountered the molten glass, the glass cooled inside the pots, cracking them rendering them useless for melting glass. Many of the furnaces were lost and and families destroyed as they did not have the money to  rebuild. 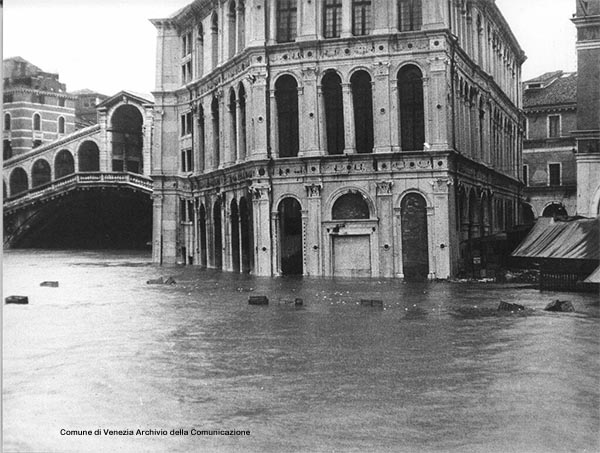 Precious artworks and other treasures were damaged and the world turned out to save them. Save Venice was born in response to these floods and in the decades since has made a measurable impact on cultural preservation in Italy, pioneering new methods in art conservation and serving as an influential model of private philanthropy.

Works that were not directly damaged by soaking in the floodwaters or the rise of humidity in the walls still needed to be stabilized and cleaned. The Tintoretto depiction of “Paradise” in the Doges’ Palace is the largest known canvas in existence with an area of more than 1,600 square feet or the size of a nice apartment. It was moved to the Gothic church, San Gregorio, because of the heights of the vaults which accommodated its size and carefully restored. 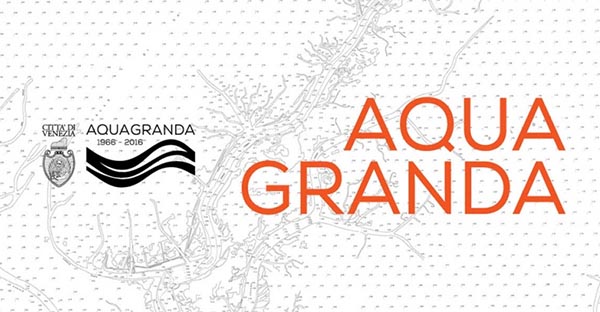 In Murano, the exquisite church Santi Maria e Donato’s flooring remained flooded even after the flood. The extensive repair included underpinning and removal of the floors. A vast concrete vault with sump pumps was built under the church after which the floors were cleaned and replaced.

There are many exhibits around Venice commemorating this tragedy. Through Jan 8, 2017 in the Olivetti Office in San Marco you can see many pictures. Around Piazza San Marco, many shops have drawn lines on the shop windows to show how high the water was. 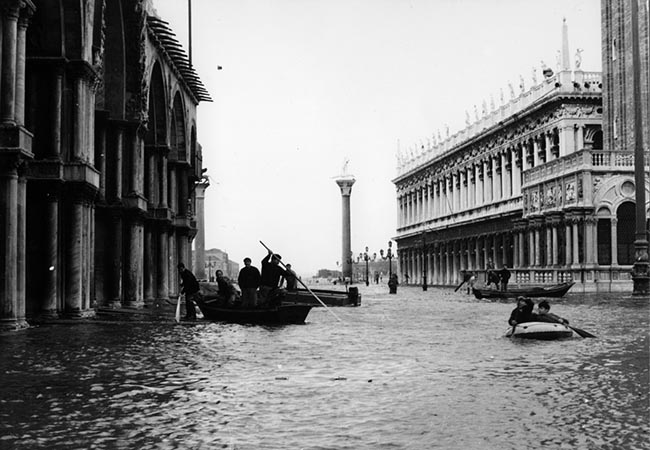 In Venice there are some 6,125 works of art which the foundations Venice in Perl, Save Venice and Artistic Patrimony, a local municipal organization strive to maintain and preserve.

We all hope that the MOSE project will save Venice from the kinds of devastation of 1966, though it is still in the distance and that such a high surge of acqua alta will not happen until MOSE is fully functional to keep the water out of the lagoon, though even with MOSE, Piazza San Marco will continue to have some flooding.