When the Fondaco Tedeschi was built in 1228 for the businessmen who oversaw the commercial trading around the Rialto, they could never have envisioned it being occupied by the top brands in the world. Yet, some 788 years later, a new chapter begins and the building has been restored in grandeur that probably exceeds it’s original design, and is now home to the top 21st Century brands. 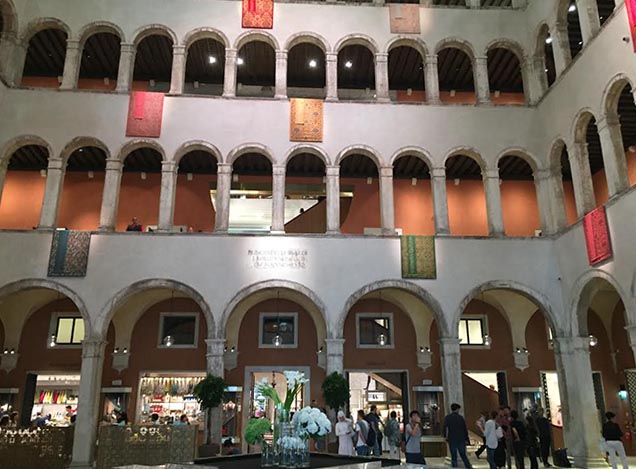 Small Shops and in the distance the Escalator

It served as a warehouse, customs house and clearance of goods coming into Venice and the designated place for German merchants to live and work in the important trade of goods from the Orient heading to their homeland with La Serenissima (Venice) receiving commissions on the trade of these goods. A fire destroyed the first building, which I presume was not as grand as the one rebuilt between 1506 and 1508, a four story building with some 200 rooms with the lower floor which opened to the Grand Canal maintained as warehouses with offices and residences in the upper floors. It functioned in this commercial capacity until 1806 when Venice surrendered to Napoleon. Napoleon suspended the German’s activities and turned the building into the state customs house. Fortunately the Napoleonic period of Venice was brief, though Venice was delivered as a present to the Austrians. 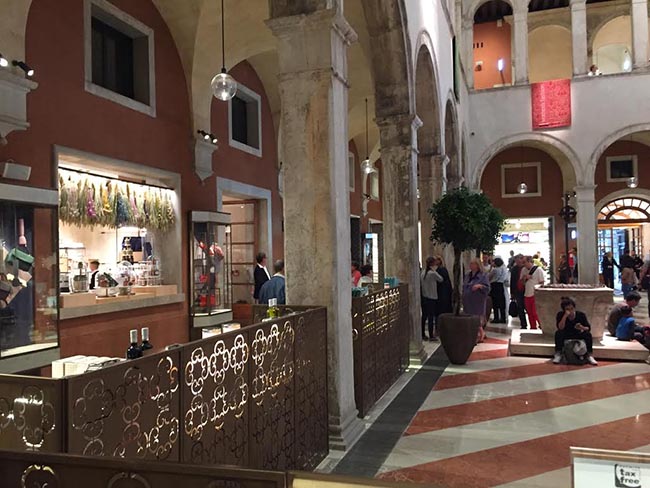 The Pozza – Well was part of the original building

Since 1870 it became the central Post Office in Venice. As a post office, it was fairly intimidating to me. It was a cavernous building and each footstep reverberated on the cold marble calling attention to the straneri (foreigners) in the building, who clearly had no idea the protocol. A large open atrium was surrounded with small ticket style windows with little to indicate what you did at each window and intimidating Venetians who spoke often in dialect. When we began working with the glass of Murano, we spent a lot of time at these postal windows with customs forms. It was also the place you sent telegrams and cashed travelers’ checks (I know those seem like prehistoric activities – but we had no cell phones or ATMs). Almost always we were in the wrong line and ended up waiting for hours – or until the window abruptly closed for a break, lunch, or we always felt because we were just about to arrive. 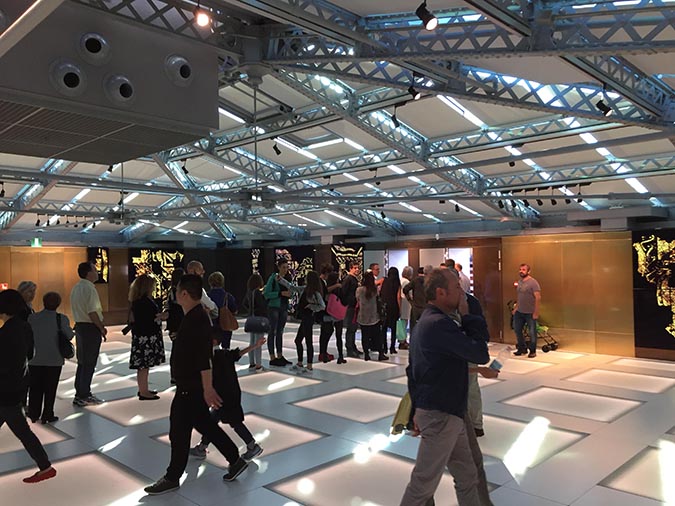 But the poste (la poste) did little in the way of upkeep and large portions of the building were hardly used. Italy’s coffers were bare and they began selling off these irreplaceable buildings – national treasures. Many were sold into developers hands to make hotels. So when it was announced that the building was to be sold, it appeared that again a treasure of the city in the prominent location at the foot of the Rialto Bridge would become a place inaccessible to the citizens of Venice – for they rarely visit 5 star hotels. 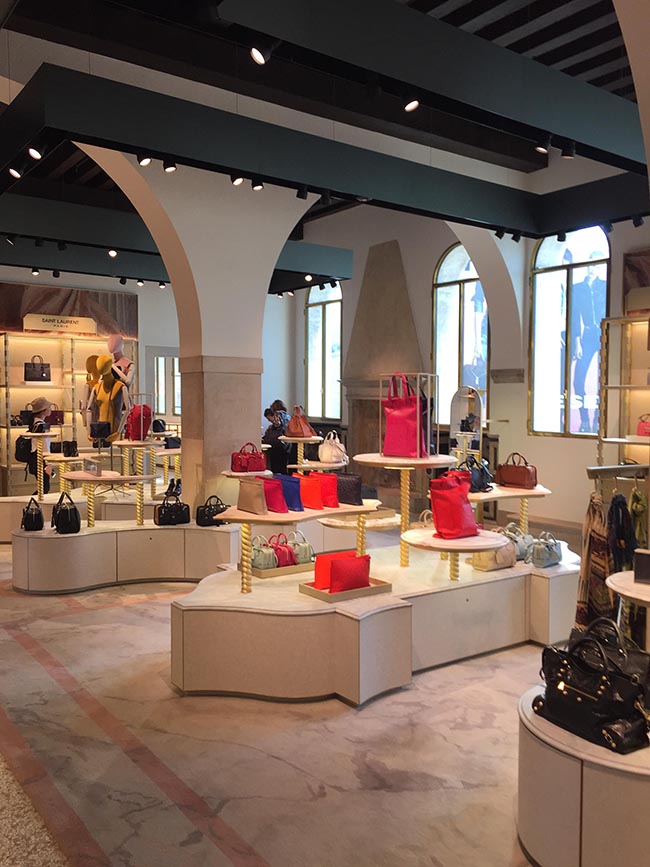 But Benetton, a Veneto company, headquartered in Ponzano and known around the world for its clothing, purchased the building from the Italian government in 2008 and commissioned the design and development of this 72,355 Square Foot luxury shopping center. When it was announced Benetton purchased the building, a sigh of relief went out in Venice as the family/group is known for its dedication to the Veneto and for its cultural work. 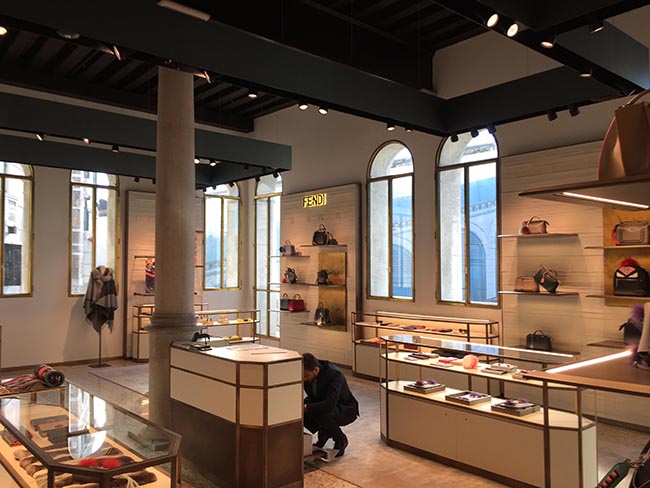 Fendi with a view of the Rialto out the Windows 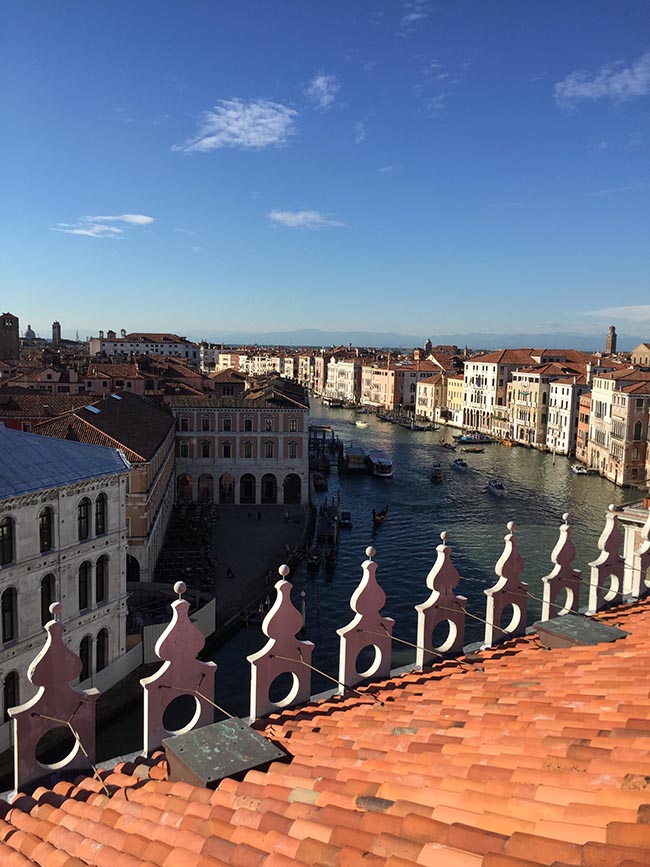 The renovations preserved the open areas and feel. 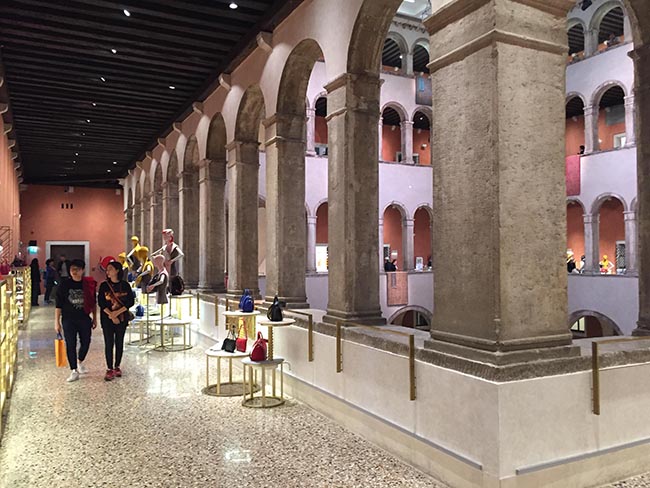 The For more Great Pictures of both inside and outside

The rooftop terrace provides spectacular views of the city and is open to the public as is the interior courtyard. The shops are operated by DFS (Duty Free Shops). The grand opening was the end of September and it will provide some 500 new jobs for the city.

I believe those original “Merchants of Venice” would approve of the new lease on life given their legacy. What is more fitting that after 788 years, it again is a trading center, and most importantly, a place open to all Venetians, Italians and tourist.

Let’s meet for a cappuccino!