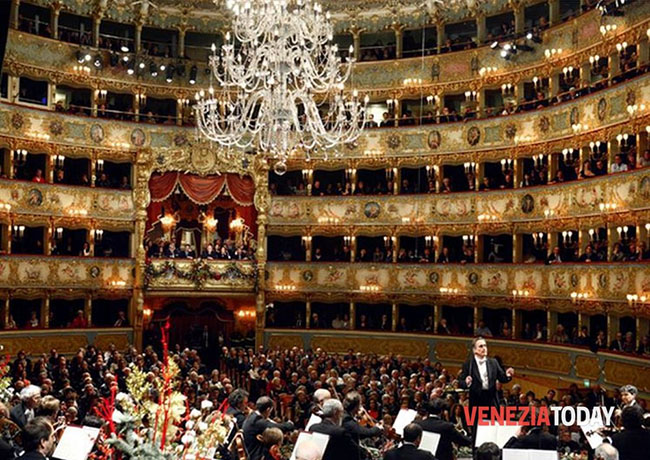 La Fenice, the beautiful opera house in Venice celebrated 20 years after the fire of 1996. La Fenice lives up to its name (Phoenix) which means “rise from the ashes” as it has been rebuilt 3 times as a result of fire during it’s 200+ years and endured family squabbles and  legal battles. It did rise from the ashes from the 1774 fire of the prior theater San Benedetto and survived until the second fire of 1836, a smaller fire, it was reopened within a year.
The last and most intriguing was 29 January 1996. The theater was closed due to renovations. The surrounding canals has been emptied of the water needed to fight the fire. And the fire alarm system turned off. A passing policeman spotted the fire and within minutes it had enveloped the theater. The firemen were stymied without the water and it became apparent quickly that the theater could not be saved but there was a bigger threat: Saving Venice and preventing the spread of the fire through the city.

Only the facade and exterior walls survived the flames. When the roof collapsed, the interior with its lavish eighteenth and nineteenth century decor was lost, including the stage curtain hand painted with the Serenissima (Venice) Naval Victory at Lepanto was also desrtoyed.

Arson was immediately the talk of the town with connections to the Mafia hinted, but never proved.  So many things pointed to arson, the open windows, the location where the fire (or fires) began. The fire alarms had been turned off. Eventually the evidence pointed to the electrical contractors and March of 2001, a Venetian court found the 2 electricians, Enrico Carella and Massimiliano Marchetti guilty. Their motive to destroy this beautiful building appears to have been the heavy fines they were under as a result in delays in the restoration. Carella disappeared before a final appeal was turned down by the court and was arrested on the Mexico-Belize border in February 2007.

Venice, following the motto that it adopted in 1902 when the bell tower in San Marco collapsed, “Com’era, dov’era” (as it was, where it was), committed to rebuild exactly as it was and in the exact location.

The reconstruction began in 20016 and in 650 days a team of more than 200 craftsmen succeeded in recreating the beauty of the old theater with about 96 Million Euro. Fortunately, the acoustics were intact. The architect used photographs from Luchino Visconti’s 1954 movie Senso which had been filmed in the theater to replicate the 19th century design.

The logistics of construction in the heart of Venice were numerous. Surrounded by dense housing, built over hundreds of years and canals made for many challenges. There was not enough space to produce cement so they constructed a pontoon and moored it in the Grand Canal pumping it through pipes at the bottom of the canals. A plus for the reconstruction is the reopened canal entrance allowing theater guests to arrive by water – a romantic, elegant entrance!

Many benefits were held to raise the estimated 96 million Euro needed for the restoration. The first was Woody Allen, the theater burned just a month before Allen was scheduled to perform with his Dixieland jazz band. The show went on at the nearby Teatro Goldoni and Allen turned over all profits to the reconstruction fund. In 1997, Elton John, part time resident of Venice, performed at Carnegie Hall at a concert to raise money for La Fenice  organized by Save Venice. Save Venice also financed the re-creation of the painted ceiling above the theater’s performance hall.

The City of Falling Angels by John Berendt, certainly never as popular as Midnight in the Garden of Good and Evil, gives a great story of the process, a view into the gossip that is Venice, as he interviews all those surrounding the fire. One of the stories he tells is of Archimede Seguso – Murano Maestro and furnace owner. Seguso’s house was very close to La Fenice and stood by the window all night mesmerized as the theater continued to  burn –  knowing that his own house was in danger, he never evacuated. 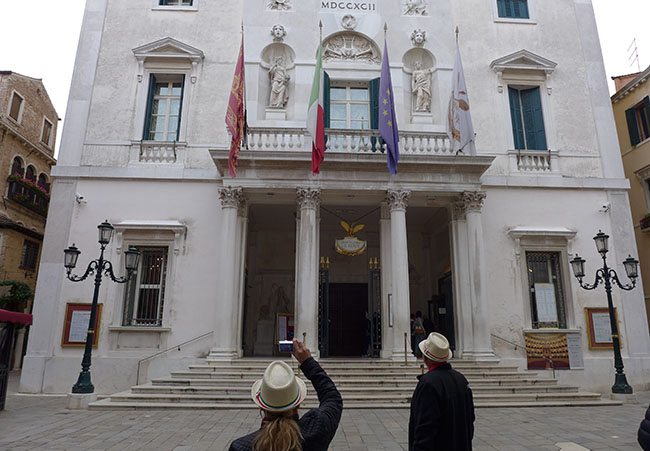 For more information on the history of La Fenice:

Wikipedia and Save Venice

On the anniversary of the fire, the theater is open to the public with no admission fee.

← Venice Carnevale Begins with a Parade
Carnival in Venice 2016 – It’s a Wrap! →