When the Leone di Venezia flew on Tuesday – it closed the Carnival for 2016. There were mixed reviews from the locals. From me it was a definite thumbs down! Maybe I don’t like change, as I was quite happy with the formats from earlier years. 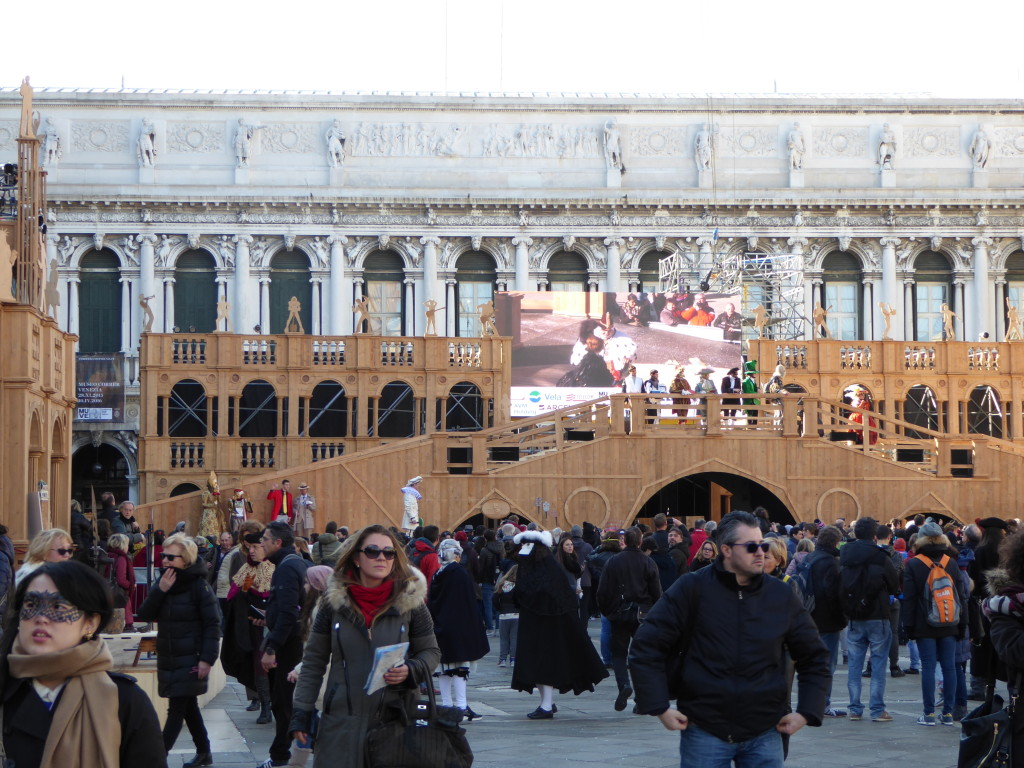 The “design” presented by the committee for Carnevale 2016 appeared beautiful on paper, but in reality, the booths were small in comparison to the size of the piazza. The wooden “Rialto Bridge” took me 3 days to realize that was what they were trying to present. I missed the tables where you could sit and watch the Contest for the La Maschera Più Bella (The Best Mask Contest) and the food/drink concessions which accompanied it. However, none of this prevented me from enjoying the costumes, the air of festivity and the romance of simply being in Piazza San Marco. 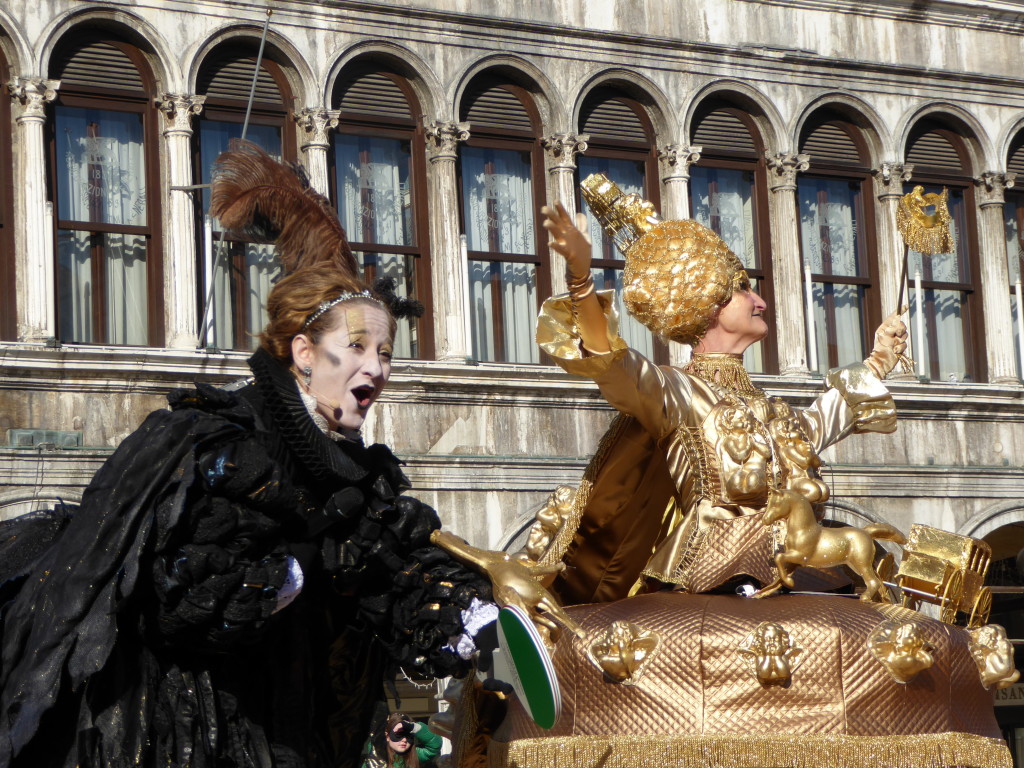 Presenting the Contestants in the Best Mask Contest

They attempt to spread out the carnival through the city and even on the mainland in Mestre was unsuccessful by everyone’s standards. First the poor Marie candidates had to appear in Piazza San Marco and then be loaded on a boat/bus and taken to Mestre. Mestre is the city just over the bridge and has not the appeal of Venice. Even the merchants in Piazza Ferreto were unhappy with the results of the attempt at Carnevale Mestre. The evening events were held at Arsenale and included dancing and the Il Banchetto del Re ovvero della polvere di Cipro (The Banquet of the King) which cost 300 Euro per person. The most expensive was the evening at Palazzo Pisani Moretta, with a price tag of 700 Euro, included a dinner and a show in a very exclusive setting along the Grand Canal.

There were the classics, the costumes rented which we see each year along with some very original costumes. Some of the best costumes were the piccoli (little children) many of whom were Venetian children which made it especially fun. There was even a contest for children of the best costume as well. 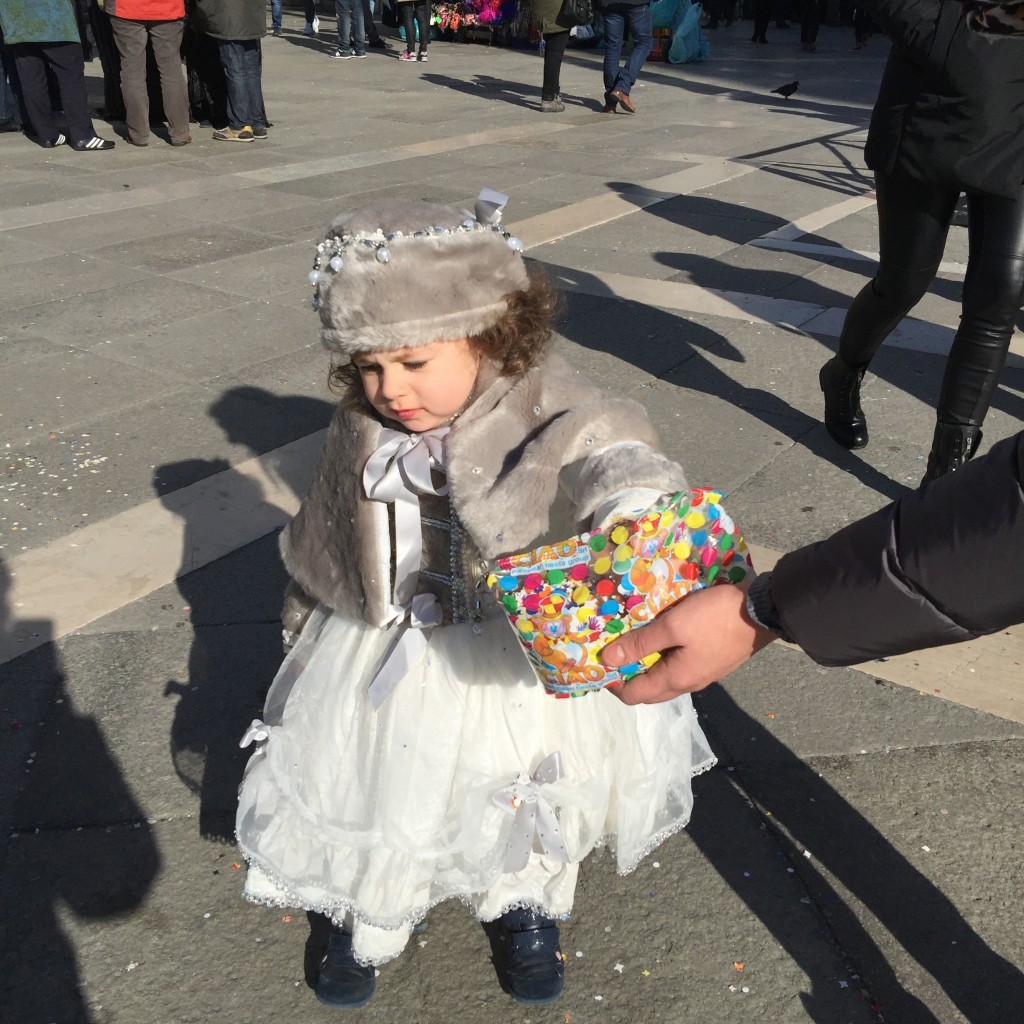 Love this Little Girl and her Elegant Costume

I think one of my favorite costumes were an English couple who were dressed as a porcupine couple. The husband had made the costumes, including the masks which were face paint along with foam for the mouths which they glued on. They should have entered the costume contest because their’s was truly original, clever and attractive. The contest is free and is held at 12:30 and 2:00 each Friday, Saturday and Sunday of Carnevale. If you get a green light, you can go on to the finals. 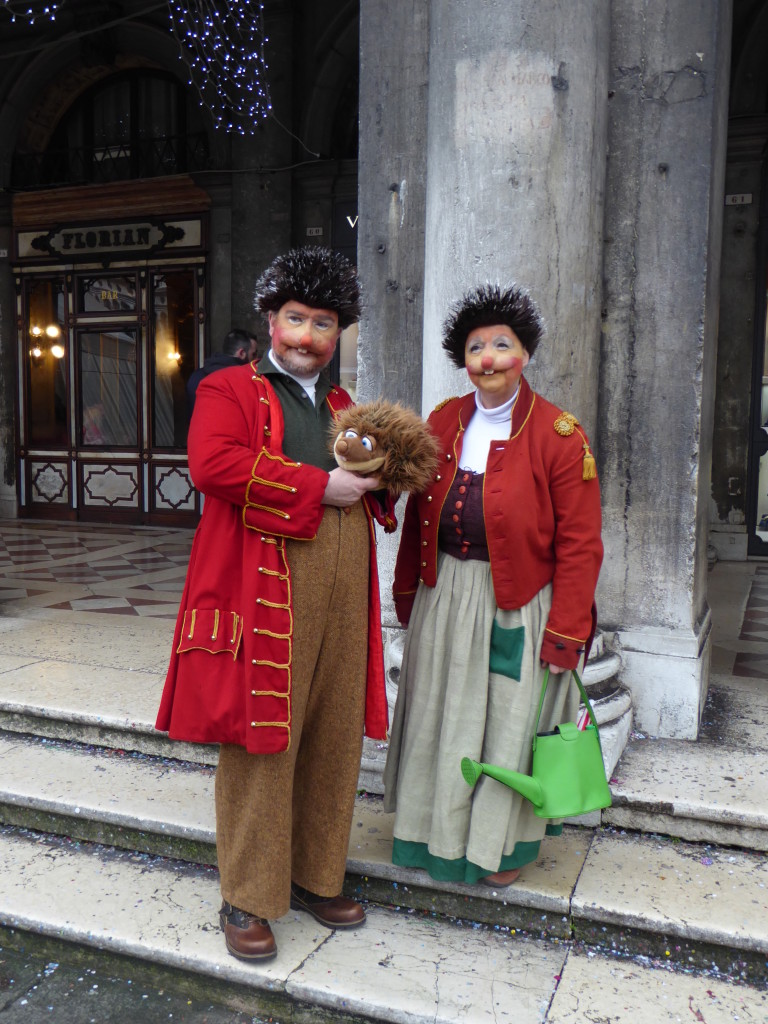 Rain and a little high water accompanied the Carnival – but regardless, it’s a wonderful tradition, and the place I want to be on Fat Tuesday! So start making your plans for 11 – 28 February 2017.

Our wonderful selection of Venetian Beads can be found at VenetianBeadShop