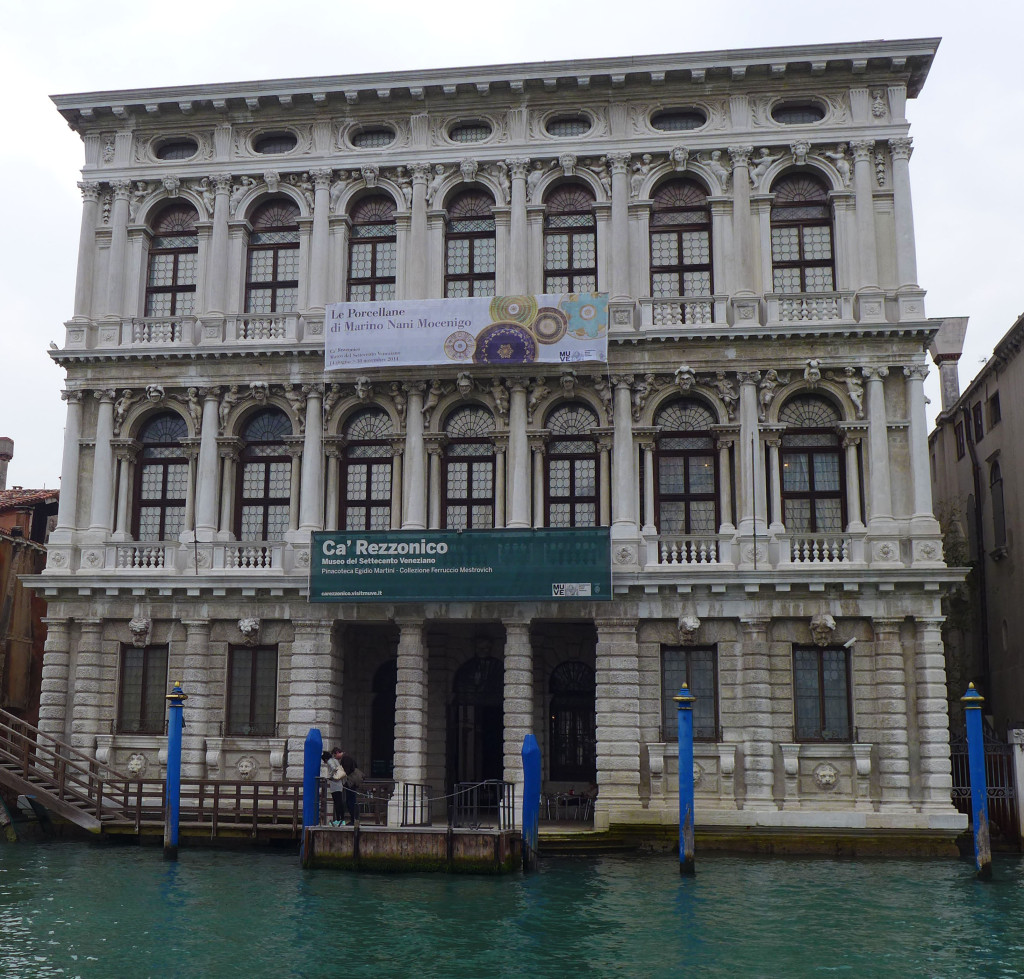 This beautiful Venetian Baroque palazzo sits on the right side of the Grand Canal in Venice between the Rialto Bridge and the Accademia Bridge. Among English and American tourist it is known as the residence of Robert Browning, who died in his apartment there in 1889. During the ’20s Cole Porter rented the entire palazzo for about $4,000 a month, throwing lavish parties. 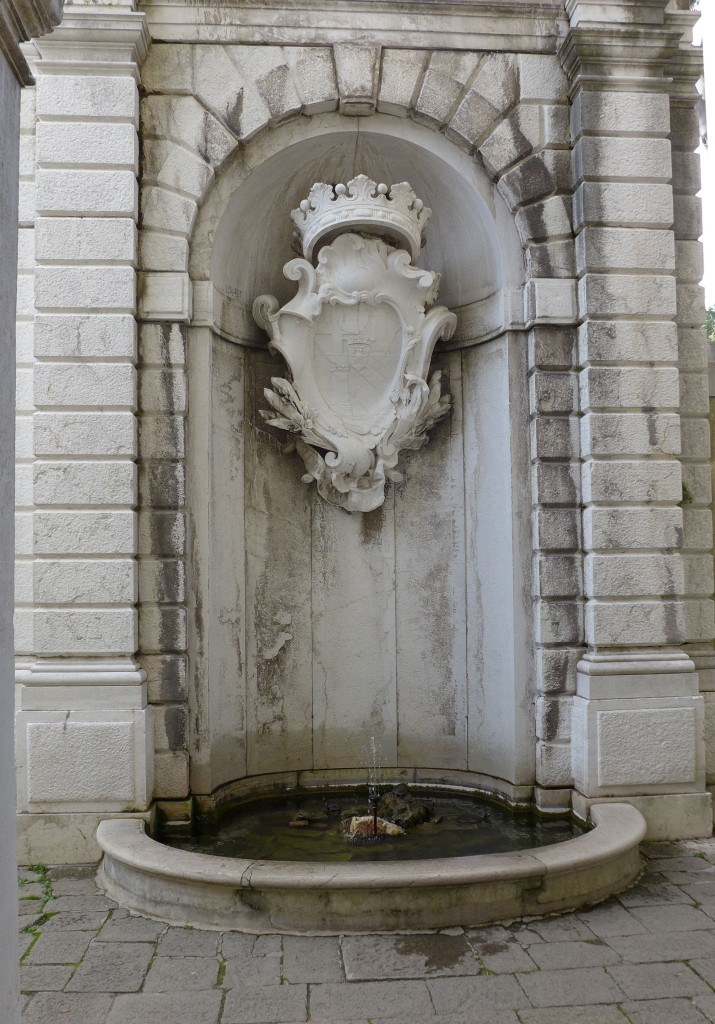 Not since this time has anyone lived in the palazzo. But in the past couple of years, a couple of new accidental residents have been discovered. The fountain in the end of the courtyard has become the home for 4 abandoned turtles and 2 carp who live together and eat together in the small fountain handfed by the workers in the musem. Tourist are making them famous making their pictures. The workers in the museum feed them and worry about them when it is cold. When high water threatens overflowing the fountain with salt water from the lagoon, the workers scoop up the fish and take them to safety as the carp cannot live in salt water, even in the middle of the night. Local children come by to visit these famous residents. 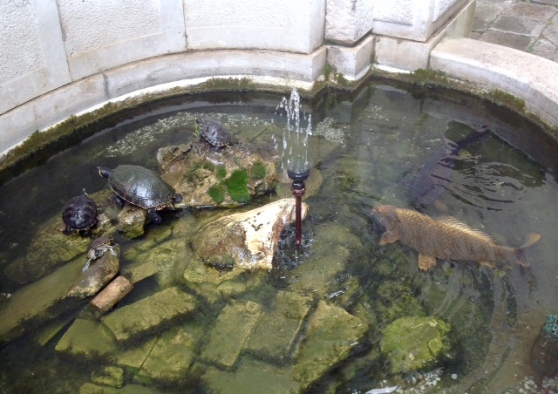 The herpetologist Nicola Novarini the Museum of Natural History follows the freshwater turtles of Ca ‘Rezzonico: “There are fine. But remember that abandoning pets is a crime. “ And Novarini makes an appeal: “Do not free them, they have a negative impact on the environment. They do damage and pose a threat to the conservation of native species. Tortoises alien, that is, those who come from abroad, are bigger, threaten and would compete with our local population. People purchase the thinking that they will remain small but as they grow, the owners do not have the space for them. Hence the abandonment. And ‘it is forbidden to release goldfish into the lagoon as they will eat the tadpoles of the local population. And so the balance is broken. Anyone who buys an animal must be responsible. “ 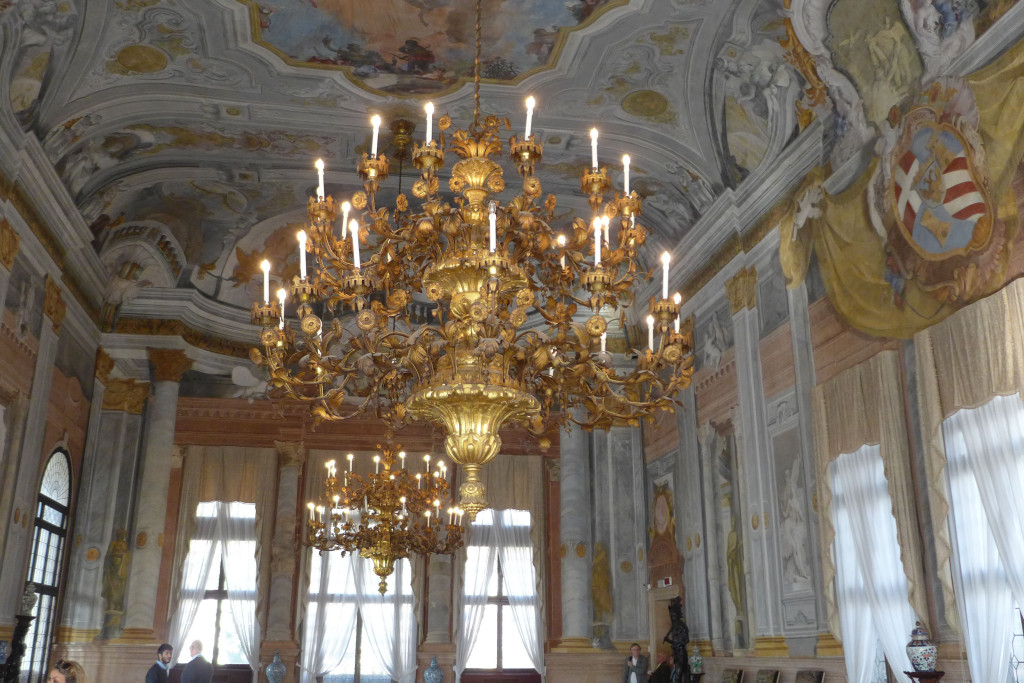 The palazzo was begun in 1649 by the Bon family who hired Baldassare Longhena, famous Venetian architect, to design it. However, Bon’ fortunes disappeared and Longhena died in  before it was finished. The Rezzonico family whose recent wealth allowed them to purchase the palazzo from the family. So it was completed in the mid 17th Century, largely in the design of Longhena and with frescoes by the well known Venetian artist, Tiepolo. 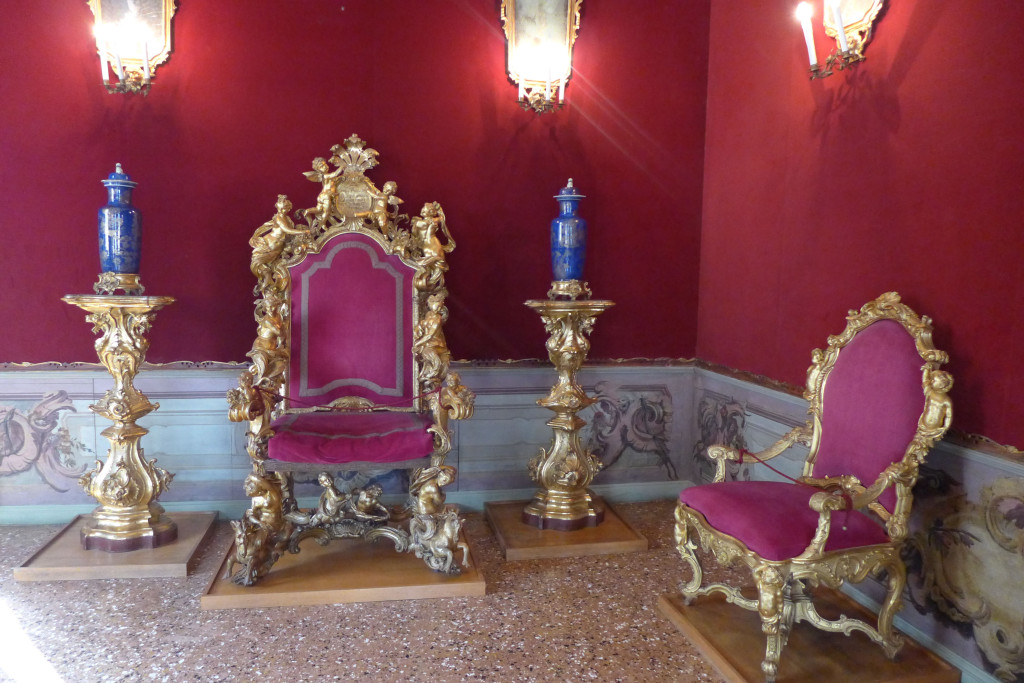 Complete with a throne room and several beautiful Murano Glass Chandeliers – it is a glimpse into a previous era. 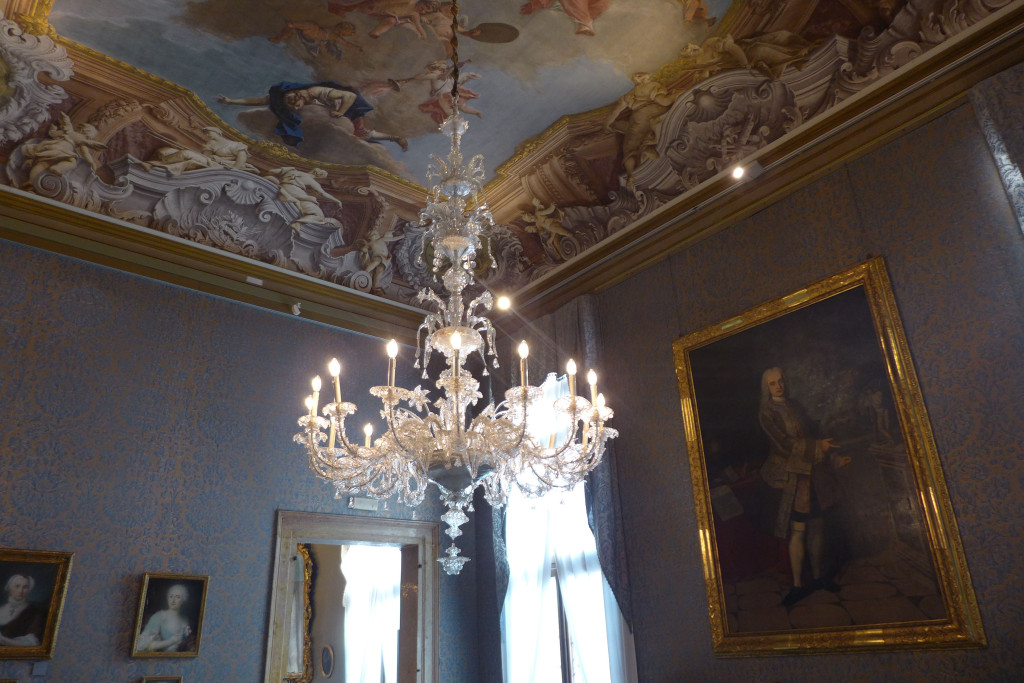 The Rezzonico family’s high point was the completion of the palazzo and the election of the son of Giambattista Rezzonico as Pope Clement XIII. The family line died out and for a while in the early 19th century the palazzo was a Jesuit College. Through some murky history, in 1837, the palazzo was acquired by Count Ladislao Zelinsky who rented it out. Robert Barrett Browning then came in possession of it and sold it in 1906 to Count Lionello von Hierschel de Minerbi, an art collector who refurnished it with lavish objects and paintings. In a continuing theme, his money ran out and in 1935. After a long negotiation, the city of Venice purchased it and it opened as a city Museum in 1936, which is today recognized as one of the finest museums in Venice giving the visitor the opportunity to see period furniture in a palazzo setting. 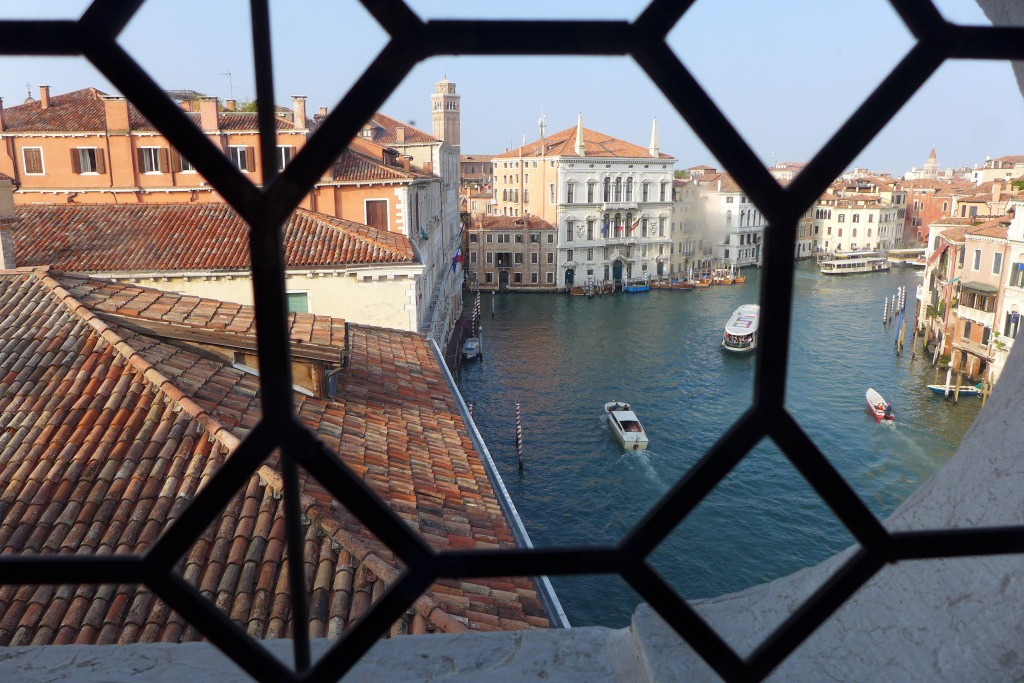 View from Ca’ Rezzonico and the Grand Canal

In the ground floor is this wooden black gondola. I believe that it is the last private gondola in Venice, owned by the famous American, Peggy Guggheim. (Will double check this on next visit.) 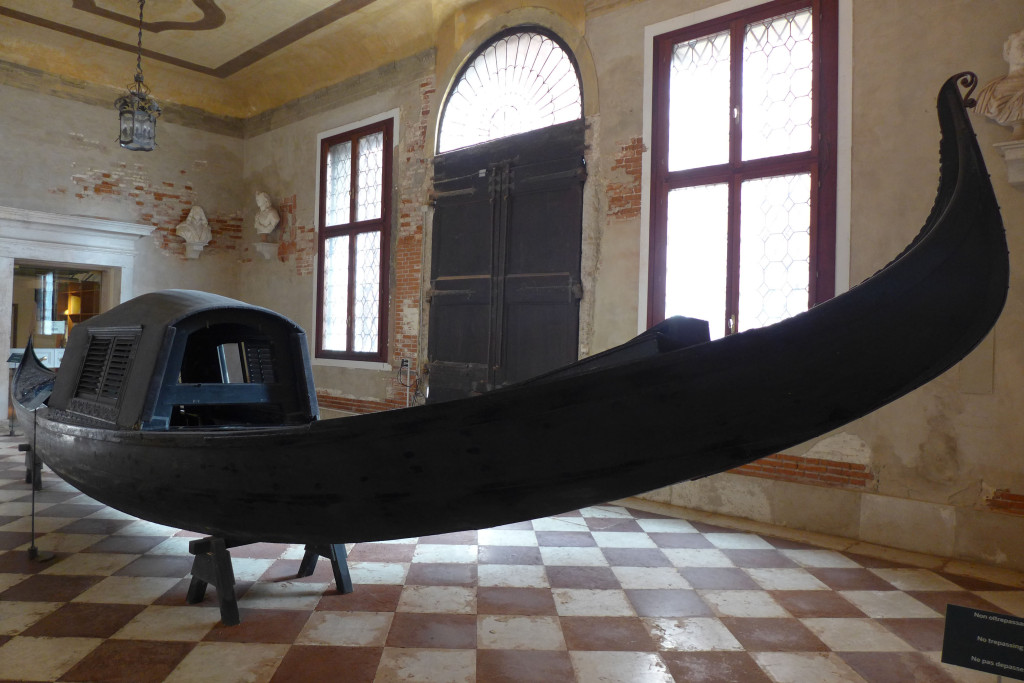 The palazzo is naturally at the boat stop Ca’ Rezzonico, and the entrance is just over the small wooden bridge. You will need a ticket.

Can’t go, you can visit through Virtual Tour

The MUVE card in Venice is your best value if you intend to visit several museums. You do not need to stand in line. You can buy six month pass for ~24 Euro. Considering that a single entrance for a combination ticket to the Doges Palace and Museum Correr are 18 Euro, the six months pass is a good deal. However, I prefer the MUVE Friend Card which is a year subscription and includes some private openings and an newsletter which keeps me informed of art exhibit openings, lectures and many other events in Venice. Exclusive events are listed on the website.

Other Museums in VENEZIA

← The New Plague of Venice
This is Not Just a Gondola →