The Redentore celebration where the Venetians give thanks for the end of the 1576 plague is next weekend. But Venice is suffering from a new type of plague which isn’t contagious nor does it kill but it is annoying. 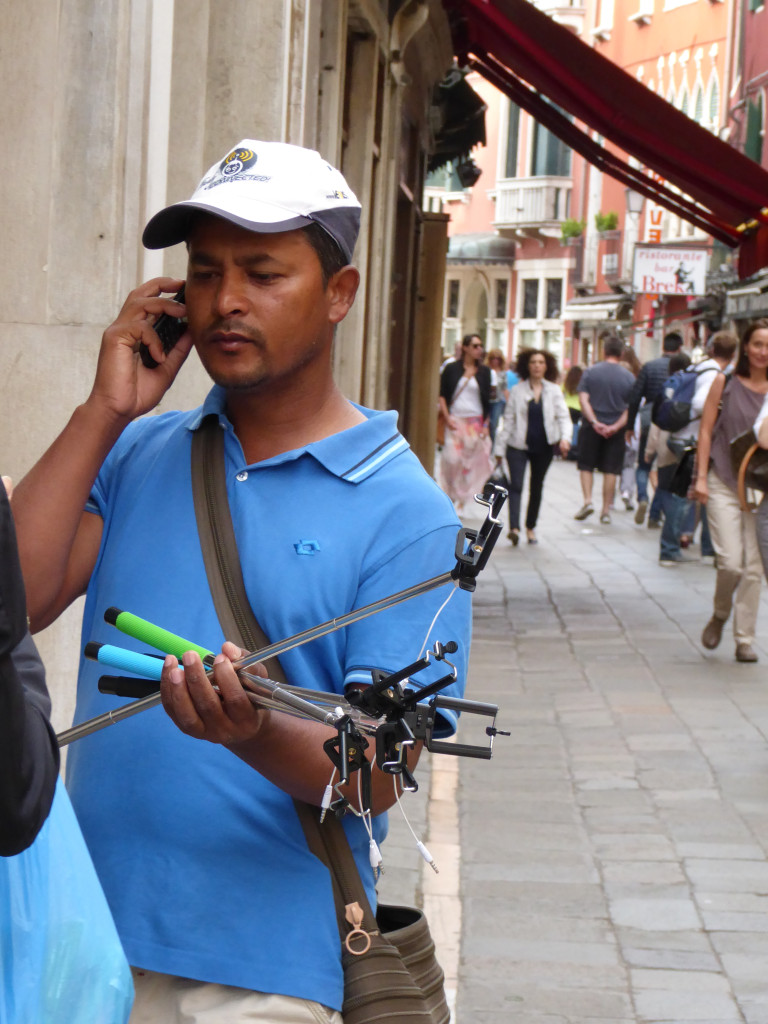 Selfie Stick Seller – Getting update from his fellow sellers.

It is impossible to walk around Venice without being being accosted by the illegal street vendors, many of whom are themselves illegally in the country. Once the domain of the fake purses, the latest entries have the “selfie” sticks, bouncy lighted balls, lighted toy rockets, plastic boots, umbrellas. They are prepared for all purchasing possibilities. Others pedal roses, invading even your favorite restaurant, and let’s not forget the illegal grain to feed the unwelcome pigeons. 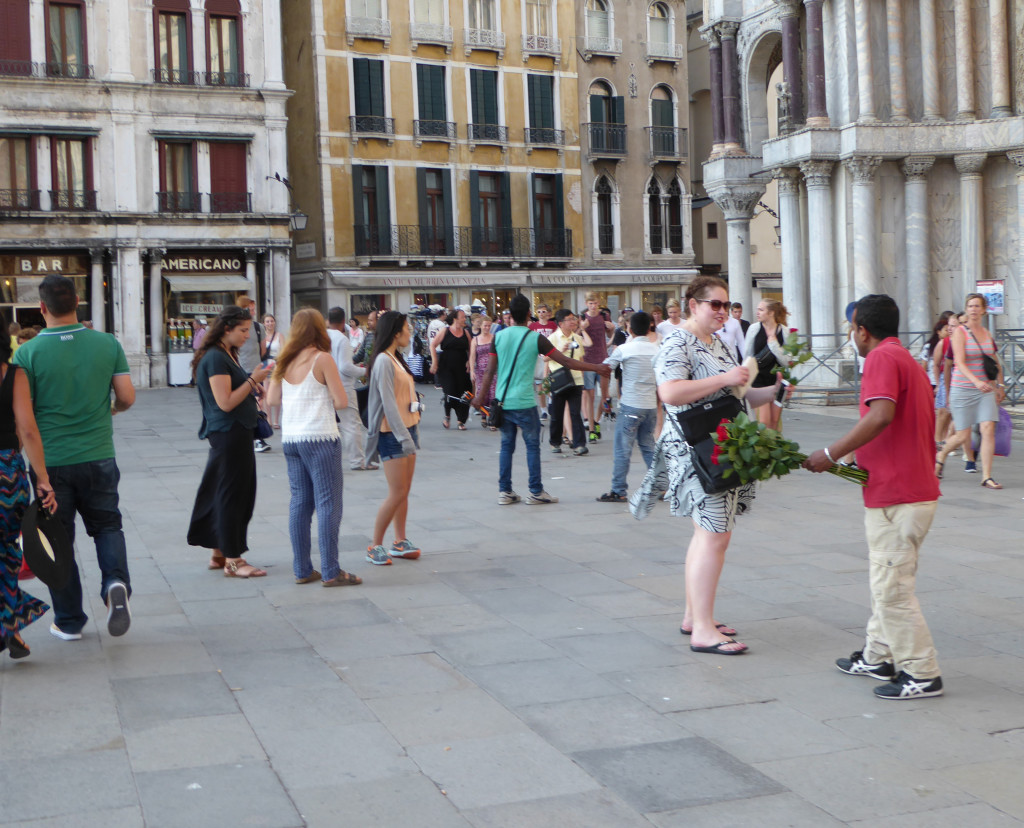 The illegals selling roses create a real psychological dilemma, if you refuse to buy your loved one a flower, what does that make you?  They target have their target market. They put the long stemmed rose in your hands in this most romantic city and what can you do? 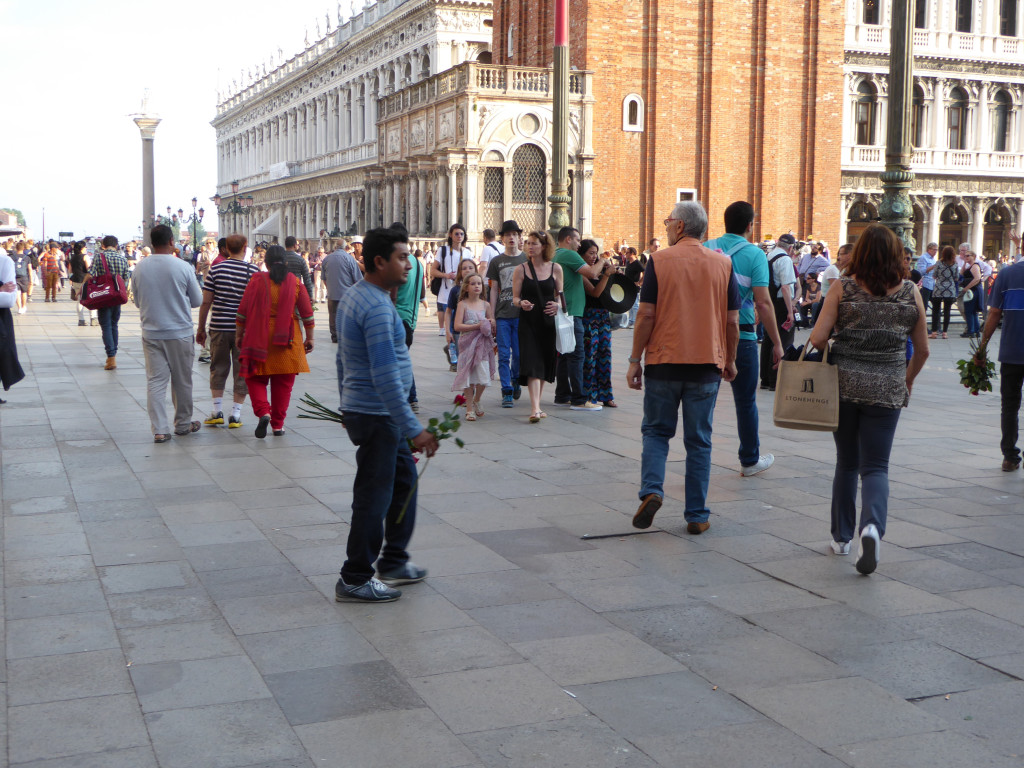 It is organized, they have lookouts, and are constantly in contact with their brothers of the trade to alert the coming of the police. They originate from the war torn and impoverished countries of Africa, Pakistan, Bangladesh and Afghanistan mostly. The Africans appear to have the monopoly on the purses business and many of us suspect they are being supplied goods by some unsavory Venetian Merchants. 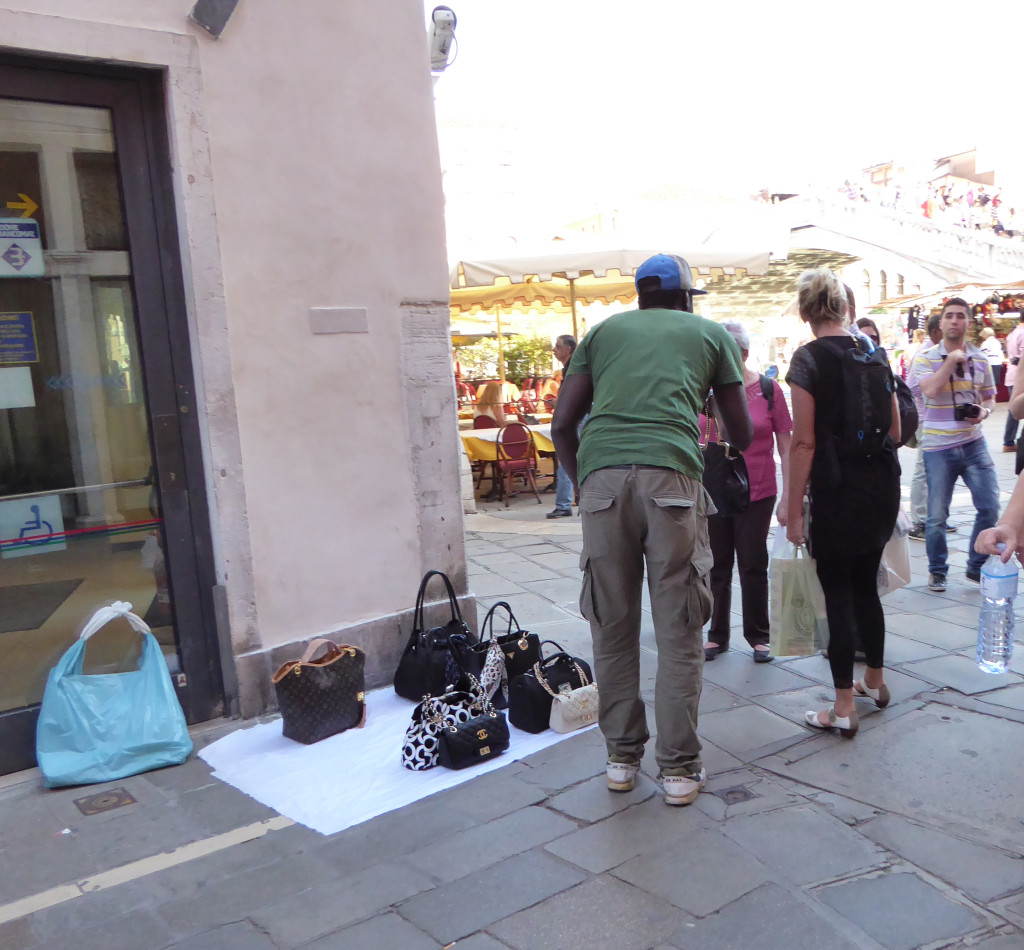 The Pakistan and Afghanistan sell the roses, the toys, the selfie sticks. They never have many – just the few you see in their hands, making them less concerned about their goods being confiscated by the police. The police say trying to eliminate them is like emptying the ocean with a bucket. These immigrants have nothing to loose. The selfie sticks they by from the Chinese suppliers for 3 Euro and sell for 8 Euro.  In the last couple of weeks, the police seized 30,000 selfie sticks but the illegals from whom they took these, are back on the streets with new merchandise – so here clearly the winner is the Chinese importers! The fines and tickets issued by the police go unpaid and since they are undocumented – there is little the police can do. There is no way to track them, to enforce any fine or punishment. 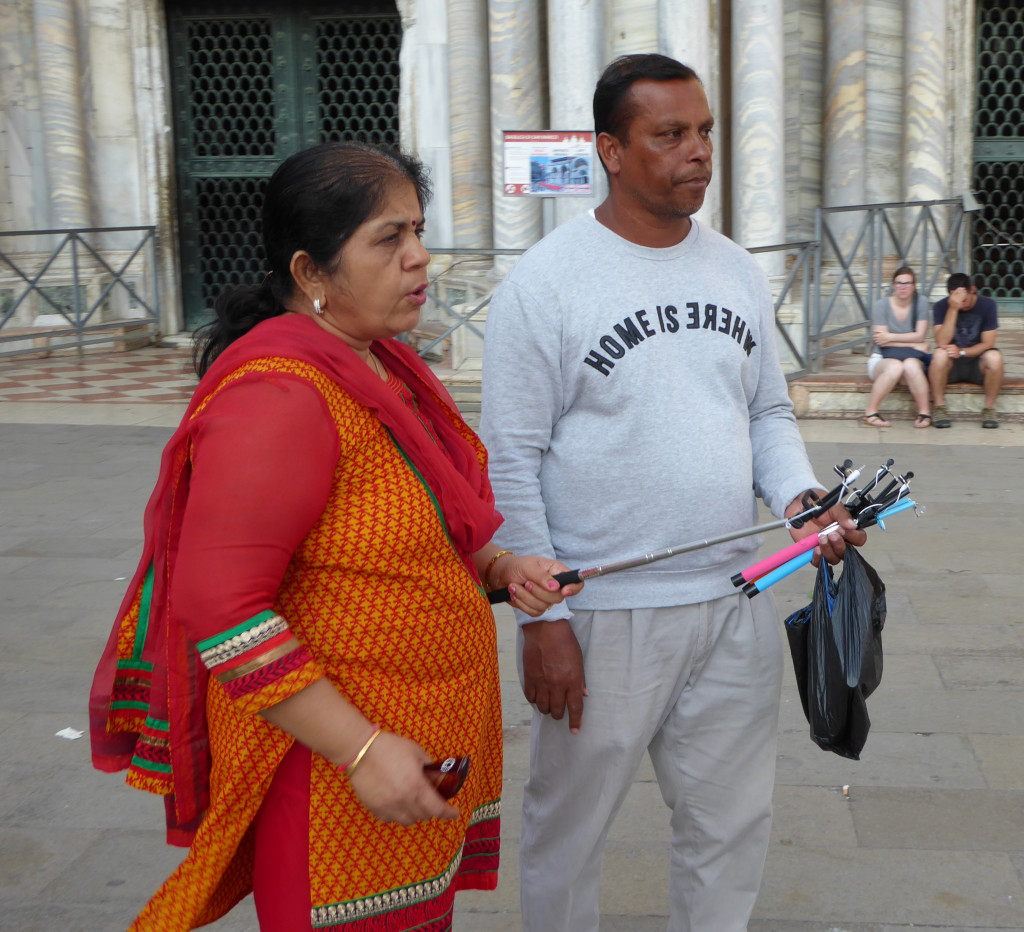 And they are now aggressive with reports daily by tourist of being threatened. The illegal vendors put the grain in the hands of unsuspecting tourist, reportedly preying on Asians with families, especially those with elderly and children. They arrive first with a smile and then demand payment for the gain, which by the time to pay the pigeons have already eaten. Tourist feel this is extortion. But maybe it’s a plot between the illegals and the birds who are clearly the winner. 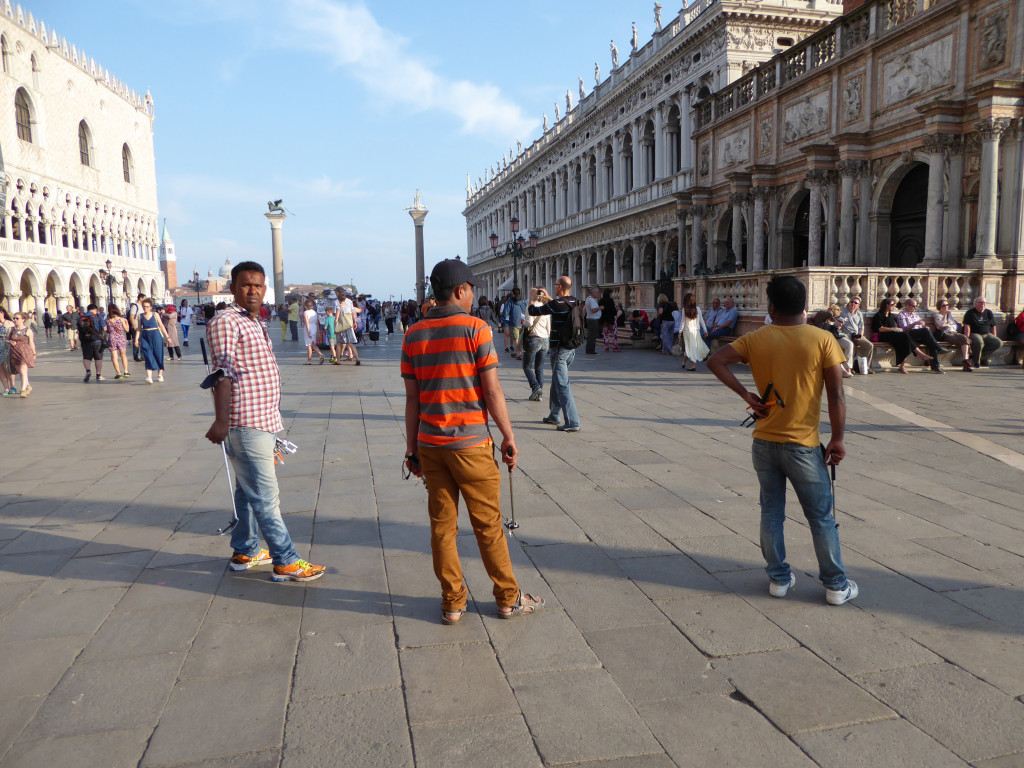 Waiting for Pigeons – the 2 legged variety – in San M arco

The main areas are, of course, anywhere tourist abound, like near the train station, along Strada Nuova, Accademia and of course Piazza San Marco. Those nuisance lighted toy rockets prevent any good picture of San Marco at night as it is impossible to get the sky without 5 or 10 in the picture. I’ve considered buying all their toys just to get them out of my pictures – maybe I could negotiate “no fly zone” time limit if I did so. 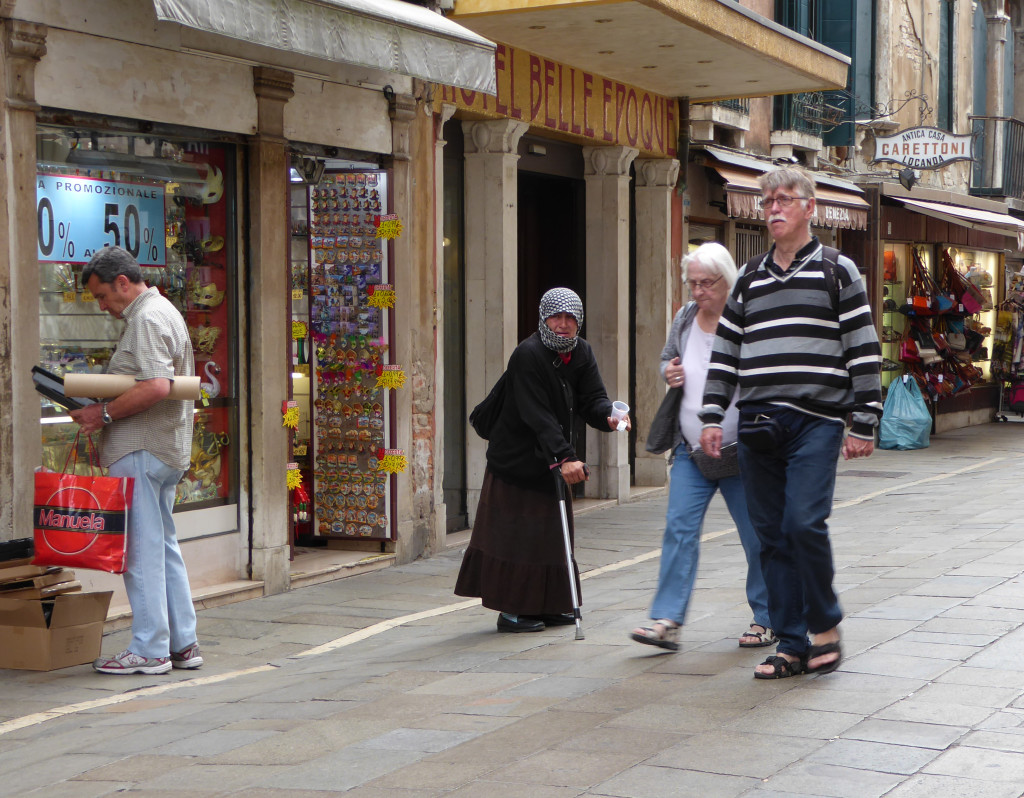 How do you know they are illegal vendors? They are slouching on the walls with cloths thrown on the street with purses, toys, selfie sticks laid on them. The same if they are taking up space on the steps of the bridge so you can barely walk up or down, because you see they are counting on you being so polite you don’t step on the goods or the cloth. They are the beggars who arrive like commuters each day on the train. They have a bit of experience in human nature and how to exploit it. 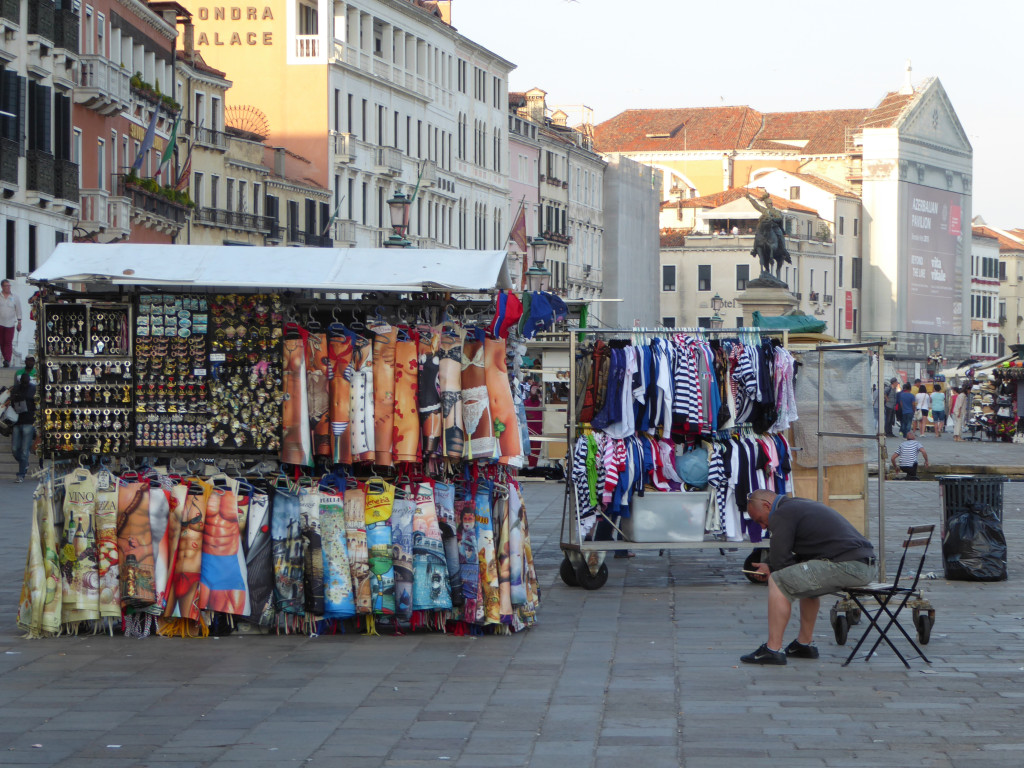 They are mingling in the crowds of San Marco – or other street with a handful of these same dollar store items. They have bundles of roses and are attempting to pass them out. They are shooting lighted toys in the air. And they call to you in your native language, Madam, Senora, Miss, they are adapt at languages and knowing which one you speak. They follow you after you say no.

How should a tourist handle these vendors. First let me say IT IS IMPOSSIBLE TO OFFEND THEM! They have heard it all and whatever you say won’t be nearly as bad as the place from where they came. Being polite will not result in them going away.

Say NO in a forceful voice.

And continue with NO, followed by NO.

Just like your mother told you “Just say No!”

I do not think we can expect the Doge to save Venice from this plague!

6 comments for “The New Plague of Venice”