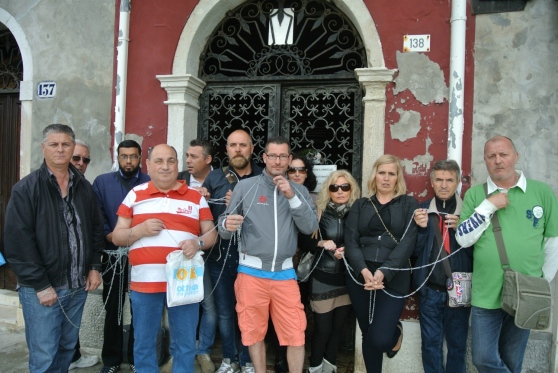 Employees in Chain outside gates of Formia (now MGL)

Workers protesting outside the gates of one of Murano’s premiere glass furnaces. They have been laid off, the company’s future in question.

This is not the first crisis in Murano 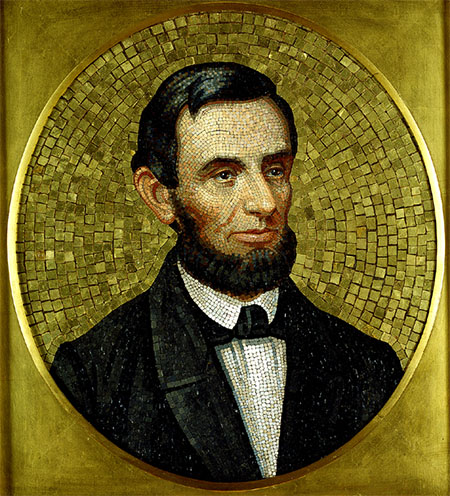 Salviati’s Mosaics Portrait of Lincoln, Donated to US

Antonio Salvati was a lawyer by trade from nearby Vicenza. He became interested in Murano glass during the restorations of the mosaics in San Marco Church. He founded his first glass business in 1859 with Lorenzo Radi in Sestiere Dorsoduro 731. Under the artistic direction of Enrico Pondio, the company developed a new method of making mosaic with glass, which rapidly reached great success in European courts and capitals before spreading in America and Asia. These mosaics decorate the St. Paul Cathedral dome and the Hall of the House of Parlament in London, St Thomas of Canterbury, the Opera Theatre in Paris and the Church at Stanford University. The portrait of President Abraham Lincoln made with these mosaics still hangs in the Senate of the US (a gift by Salviati in 1866).

He was an outsider, no experience in glass but he had a love of the industry and was a good businessman. Even today Pauly & C continues with this work. He was a savior for the island at a time when the pressures of competition by England and Boehemia were the threat.

Today they face the similar threats.

Formia International and the Kind of Saudi Arabia

The most recent crisis comes in the form of a non-payment of a huge sum owed presumably to Formia International by a Saudi company, Arabian American Oil Company, who contracted, through another Italian company in Milano, for a large installation of glass to honor King Abdullah, who died in January. The details of the 2 Million Euros for the monument are cloaked behind many legal layers, but the fact is no payment was ever made and the brunt of this catastrophe is born by the 37+ workers of this very prestigious Murano glass furnace.

Not even the residents, or employees, know the real story. It is hard to find someone who is not somehow attached to this tragedy on the small island. Employee, brother, mother, aunt, or child – it touches the entire community. And once again is an attack at the very foundations of Murano – the glass furnaces.

Formia was a prestigious production company, selling to local store owners and across the world from orders taken at trade shows and through various “agents” usually located in Florence or Milano who work with the major buyers in the world. The company was historically one of the largest located in the Murano Island  ( 5000 sq m, 26 furnaces) with more than 80 employees, with an average age less than 40 yrs old.  The quality of the glass, it’s maestro always the highest and the glass among the best in the island. However, in recent years, the furnace was led by a “manager” Milan Luigi Monti who has worked with Ferrero and Fiat and presumably would bring in top brands. But sadly his dreams never succeeded and the company faces a demise.

So he clearly was no Salvati!

An attempt to rescue the company resulted in forming of a new company “Murano Luxury Glass (MGL)” whose leadership is hidden in the shadows. And some workers were recalled to work presumably to delivery orders already on the books. And certainly there would be a void in Murano with this large furnace cold.

Murano: If not for the glass, what then?

2 comments for “The Crisis of Murano – Island of Glass”