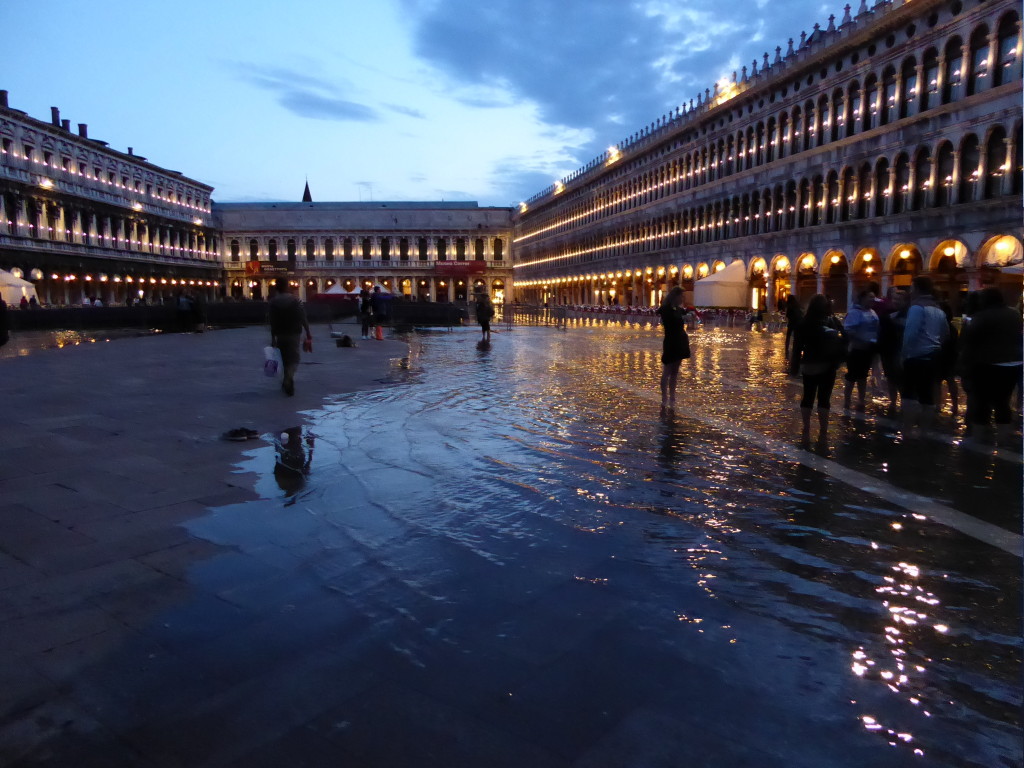 High water in San Marco ceased to be a rare occurrence in the past years, but rarely does it occur in May. I take it as a special favor for me from the Greek God of the Seas Rivers, Storms, and clearly Floods, Poseidon (or if you prefer Roman, Neptune). I love Acqua Alta in Venice second only to snow. It turns me into a camera toting tourist – only one armed with boots and the knowledge of when and how long it will last from my trusty iPhone App Hi!tide Venice (also available for Android).

Get the App Be in the Know 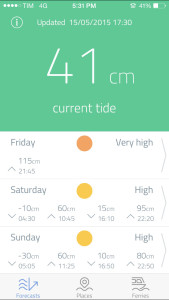 The entire duration of high water is only about 3-4 hours, the cycle of tides in Venice. These high tides result from a  combination of the scirocco (winds from the south), the normal tides influenced by the gravitational pull of the moon, sun and the rotation of the earth.

Not expecting high tides, I did not consult the local weather channel, www.ilmeteo.it nor my app on my iphone regarding the tides. The day had started badly with a 24 hour strike by the ACTV, the drivers of the vaporetto – meaning to get to Murano you must walk to Fondamenta Nove where by law they must continue service to the remote islands. Well to get to anywhere you must walk!  I was in the hinterland of Murano when someone mentioned high tides and my boots were back in Venice in a friends factory at least 1 hour away by boat then by foot.  I headed for San Marco hiking from Fondamenta Nove taking a route which carried me by a fishing tackle store knowing they always have boots for the fishermen, including waders.  It doesn’t matter they are a 2 sizes too big, I know that by the time I leave San Marco I can take them off shortly and carry them home in a bag. High tide is predicted for 9:45 pm. 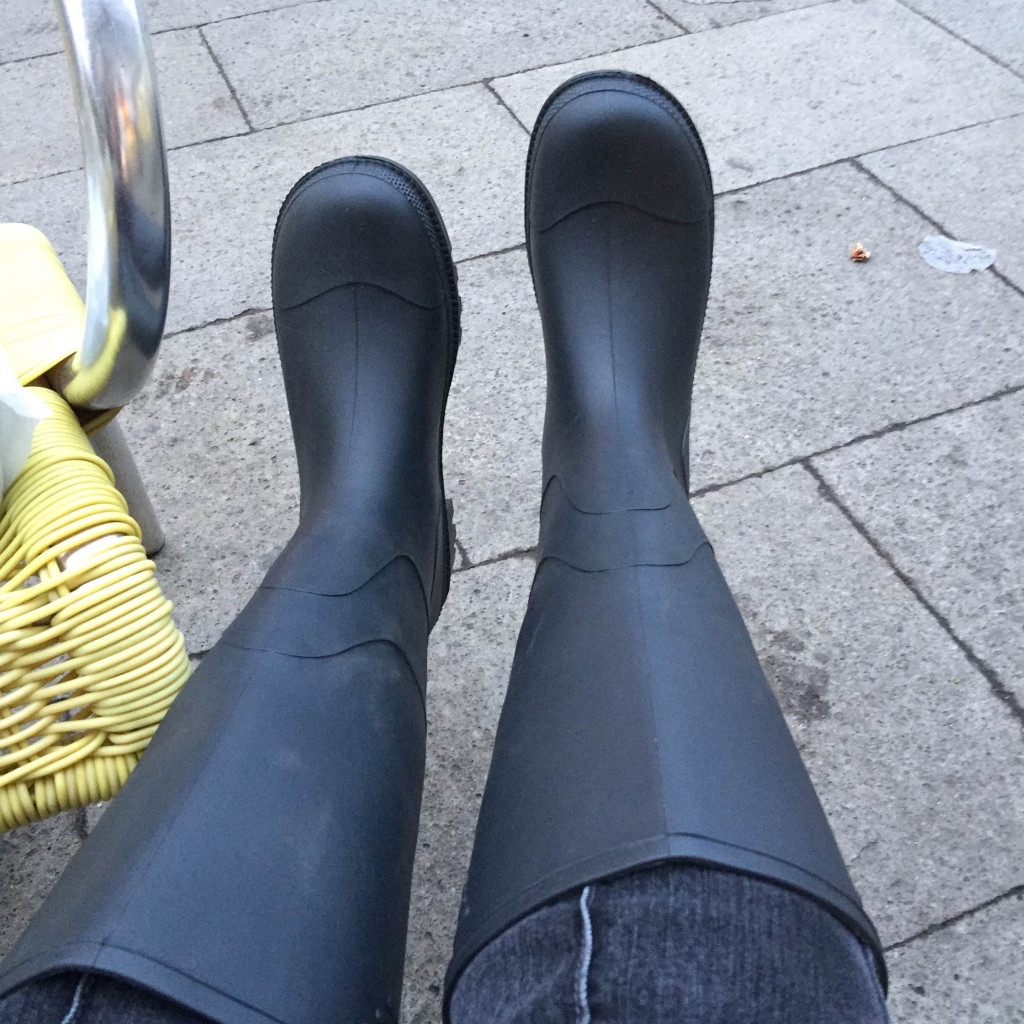 Ready for High Water! Boots On! 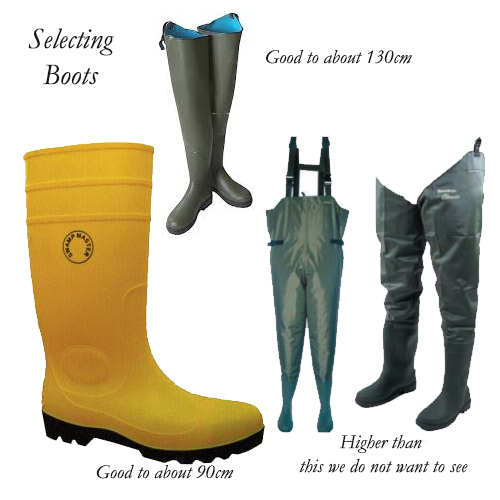 Choose Your Boots Carefully According to the Height of the Water

On the way from the fishing tackle store the siren sounds, a sound right out of World War II air raid alert, followed by the latest addition lower toned notes which give you an indication of how high it will be. The intensity of the sound scares the tourist in the streets. We all assure them we are not under attack, but that there will be water where they stand in about one hour. It is such an unreal event that the groups of tourist from the cruise ship can’t grasp it, as they know they must retreat to their monster ship at 9 p.m. and can’t believe where they are standing will be under a foot of water. Eyeing my boots, they want to bargain for my boots.

Not for sale! But I recommend the ones that now the illegal vendors are now bringing out! They are easy to identify by their bright colors of flimsy plastic. Or the alternative is to roll up your pants legs, take off your shoes and do a little wading! 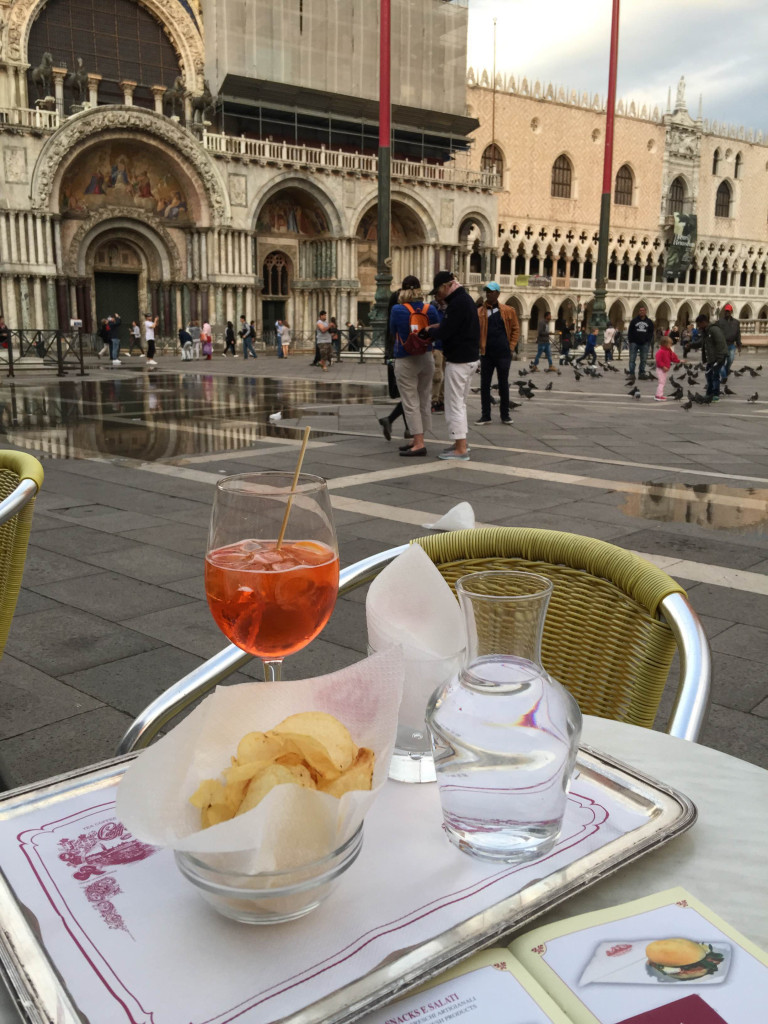 I take my front row seat at the famed Caffè Lavena, have a great conversation with Miro, a pleasant waiter, who is quite disappointed that the water has arrived. This means the bands won’t be playing in Piazza San Marco and that the cafe will close early as tourist disappear. As you can see the water had just started appearing and tourist not yet aware of the upcoming fun. The drink is called Spritz and is a tradition in Venice. It is Prosecco and Aperol (or you can use Compari).

A few hearty souls make the best of it and enjoy the novelty. My friends from the cruise ship come back through the square, wading barefooted! I am sure they will not forget their stop in Venice. Watch the progress of the water which occurred from about 7 p.m until 9:45 creeping in silently and disappearing in the same silence. 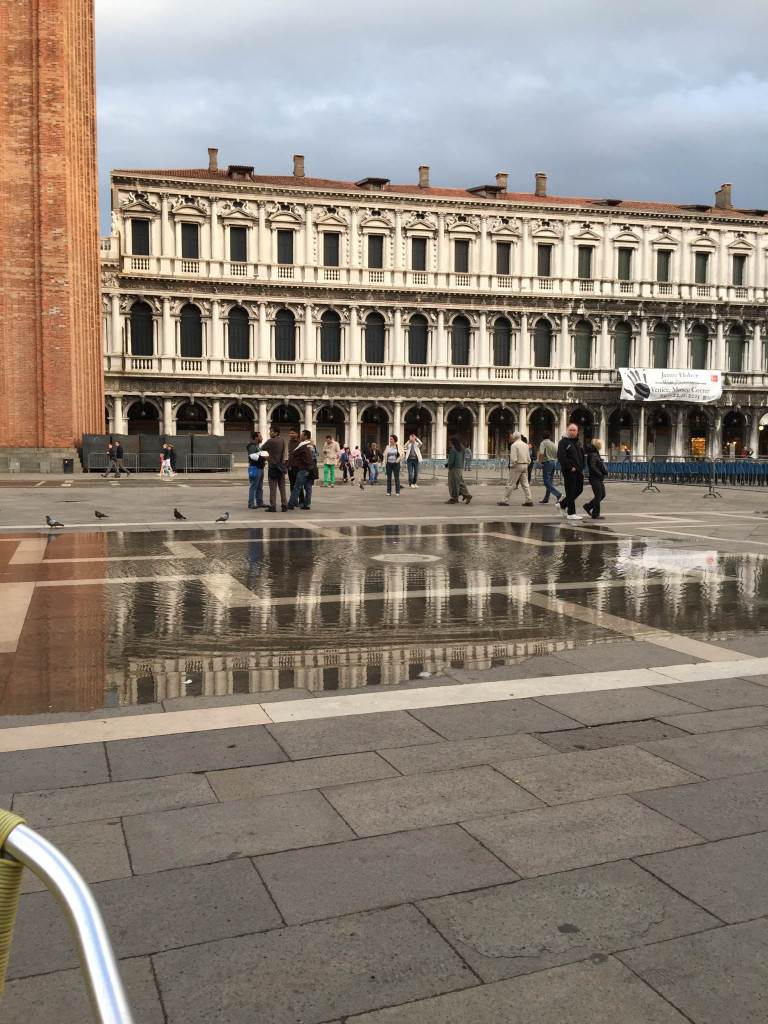 The Water arrives in the lowest spots, seeping upward.

I am not the only one prepared, though I think these boots cost a lot more than mine. 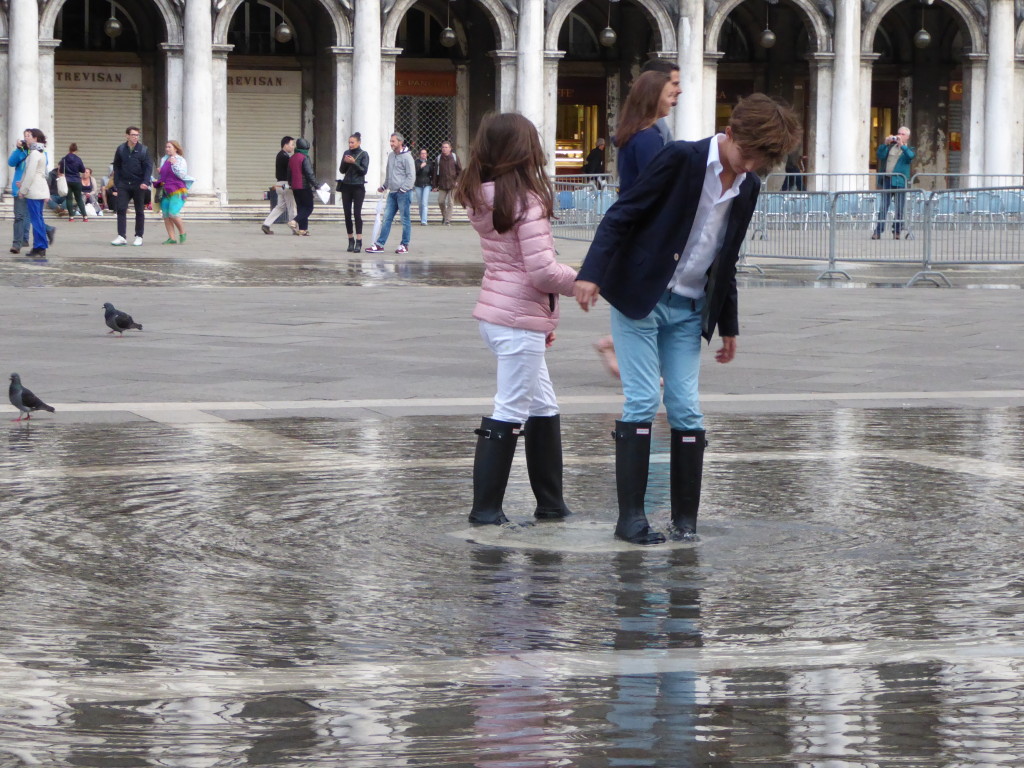 As the water creeps in, only those tourist who now have purchased the plastic boots from the illegal vendors are still in the square. But they are clearly enjoying it. Too bad for those not brave enough to stay. 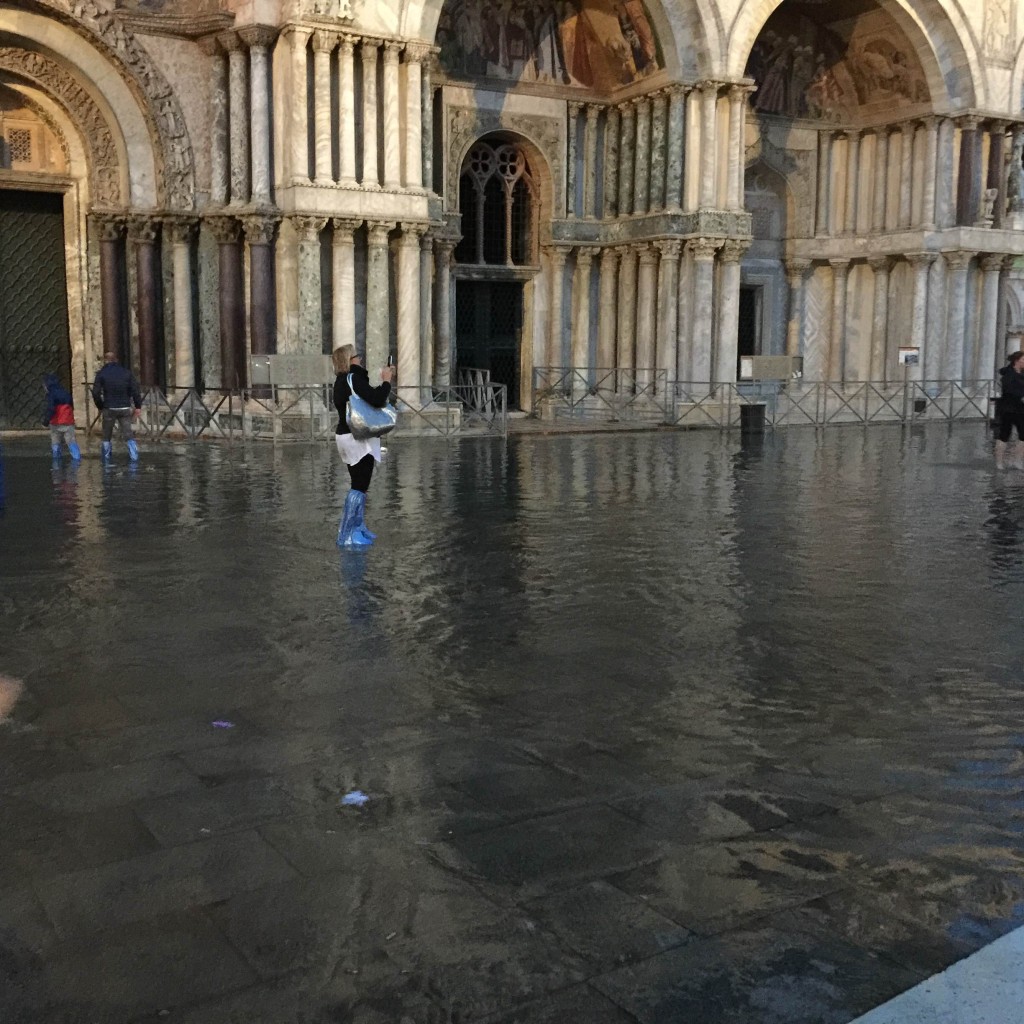 Tourist in Plastic Boots in front of San Marco

The square slowly fills and as it darkens, the tourist evaporate. 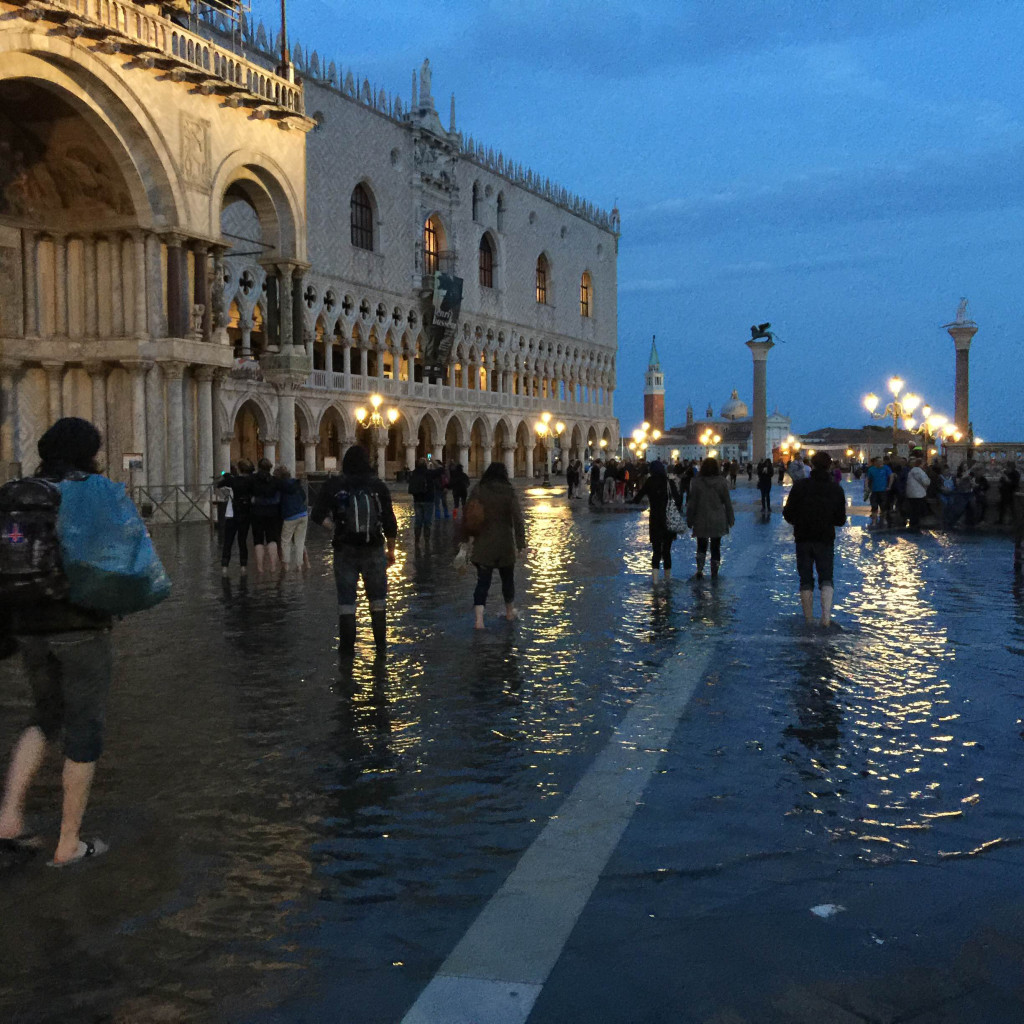 San Marco, Dark and Flooded (Doges Palace on the left) 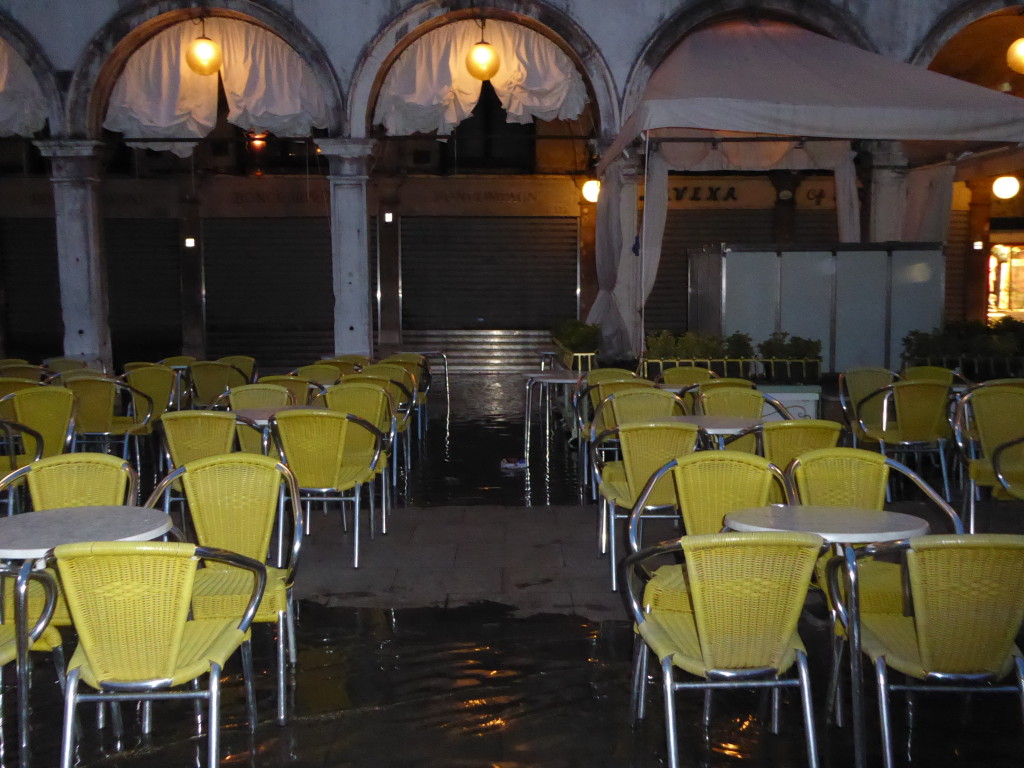 Caffè Lavena Dark and Empty and the Band Silent 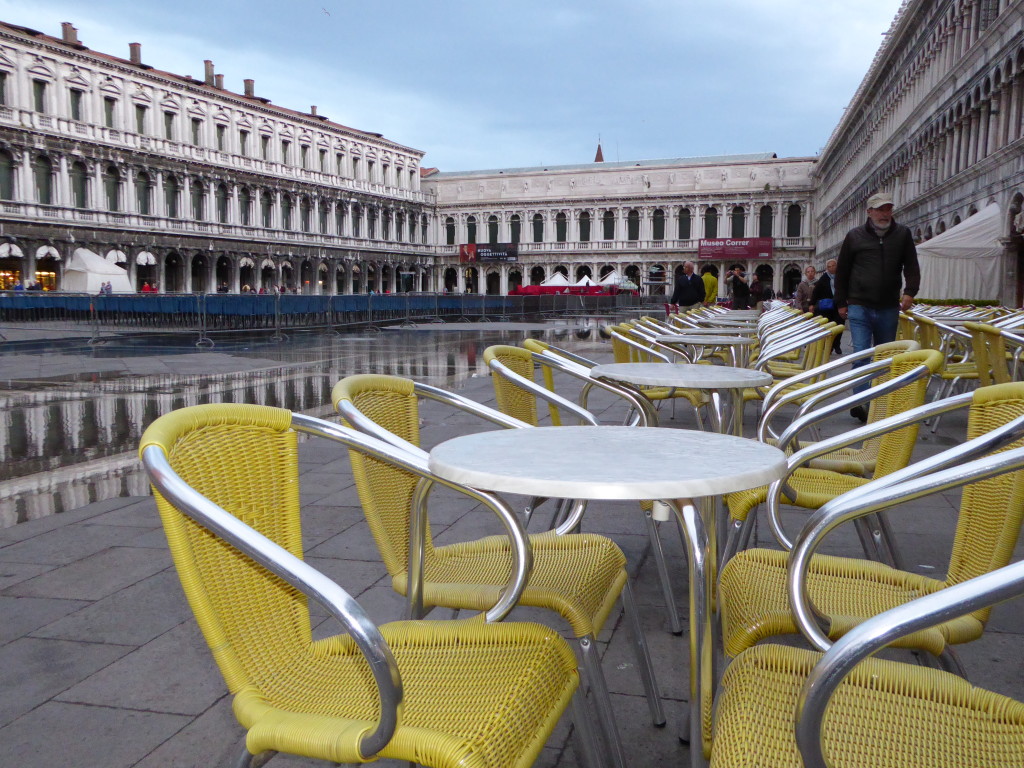 And I arrive home on dry streets walking from San Marco (the boat strike won’t end until midnight).