Venice through the eyes of Bill Weir on CNN’s The Wonder List. If you are planning on visiting Venice, or just like to armchair travel, these will give you a good sense of the city. He is trip is in the winter (in the background you can see the stage under construction for Carnevale) because he was doing a story about the high tides in Venice. (I apologize for the advertising which appears before each video – but alas it’s CNN’s film.)

Venetians to the Core:

And goes through the lagoon with a local on a little fishing boat. The local gives him the classic answers. Venetians have a great sense of humor and tolerance for nature as they must living on land claimed from the sea in the 900s.

I laugh when Weir asks this Venetian if he is Venetian or Italian first?  Venetians have always been Venetians first! Not the Pope or the Emperor could change that but not without several centuries of trying. The original settlers sought out the sea to be their protection against the Huns, the Genovese, Milano, the Ottomans and even a buffer against the Vatican and it is now the threat with the rising tides or the sinking Venice (depends on who you talk to) and maybe an even greater imminent danger – too many tourist.

Why I Love Venice:

Tourist never fail to enjoy the high water, even if it means wearing slightly goofy boots. The walkways are put out as the water starts risings, a tribute to the tenacity of the Venetians.

Less determined people might just close shop until it goes away, Venetians adapt, make walkways, make gates for their doors, move the valuables one shelf higher, and the enterprising sell boots to tourist along with slightly gaudy ponchos! (Goes under the “why I love Venice” list.) 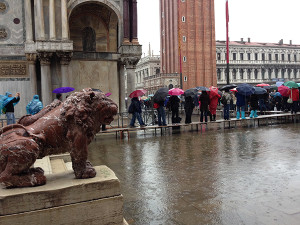 The Leone of Venezia watches the Tourist 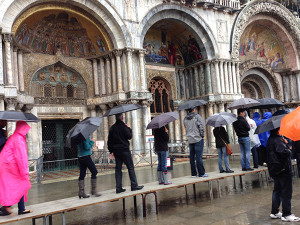 Tourist on the walkways in front of San Marco 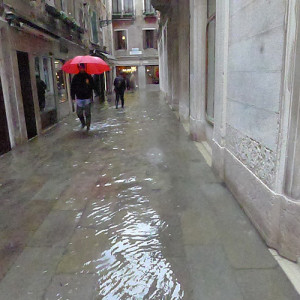 Locals Have the Best Boots – Waders! 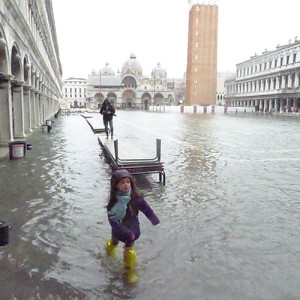 And the Water Rises in San Marco

Watch San Marco flood with the CNN Crew – The warning siren is used only when it is expected to be above 110 cm (about 3.6 feet above sea level). The multi level sirens are used when an even higher tide is expected and the tones give you a clue about how high the tides will be.

There is an app for the tides which we all have on our phones – easily downloaded whatever device you have. It comes in handy so you know when to throw your boots over your shoulders as you leave the house. After a couple of hours you won’t need them as the water slips away as silently as it arrived.

Venetians are not feeling the love.

But the sea is not the only threat. In Wier’s words, Venice is being “loved to death”. The number of visitors grows annually, with 2015 expected to be the highest number ever. This increase is expected as Venice participates in Expo2015, (more about it later). Il Gazzettino reported that 8 Million Chinese alone will visit.

During the summer when the cruise ships, tour buses and regular tourist arrive the tourist out number the residents 600 to 1 (from CNN) even with Venice’s population dropping below 60,000, that’s a lot of tourist on any day.

Maybe good for the shop owners, but the Venetians are not feeling the love.

← Venice – The Most Beautiful Bookstore
Rialto Bridge Gets a DIESEL Update →