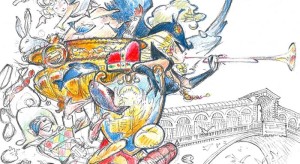 Carnevale 2015 Venice: The season is here and the opening festivities began on Saturday with the thoroughly modern parade of balloons, lights and characters. The official poster found all over Venice is by the Illustrator Giorgio Cavazzano. The theme for this year’s festivities is “Il Gusto, l’enogastronomia e il cibo” roughly translated to The Flavors of Wine and Food. 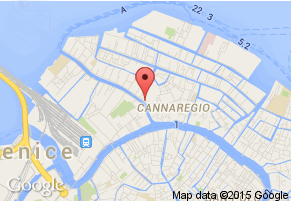 And certainly the Carnevale Venezia invites its guests to enjoy the wines of the Veneto region and the foods of Venice. There are pastries, cookies and more which are served only at Carnevale, so don’t look for them after the 17th. The food booths opened up just after the parade down the canal with each sestiere (Venice has 6 sestiere) having it’s own specialities, and the best of all those is the Fritelle, a deep fried dough, some the classic Fritole Venexiane with pie nuts and raisins, or our favorite, with cream or zabaione (a custard with Marsala) inside. What a great treat with a cup cappuccino!

This year’s theme for the parade down the Rio Cannaregio is the Magic Banquet in keeping with the overall theme of the Carneval.  (For those of you who have visited Venice and took the vaporetto to Murano from the train station, it’s where you make the left off the Grand Canal.) The video from the parade will give you a great view of the extravaganza that is Carnevale.

We’ll be posting through out the season – ending on 17 Feb, some highlights to come: San Marco/Carnevale in high water. Concert over the Water, The crowning of “La Marie” and the “Best Mask Contest”