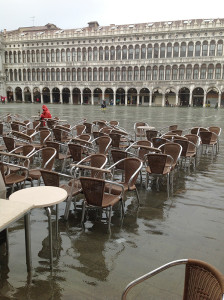 It seems that Venice citizens and tourist alike can’t get a break. With a record number of high water (aqua alta) days in 2014 the newspapers and il direttore del Centro Maree, Paolo Canestrelli, (the weather man) were constantly warning of the high water.  In 2014 more than 165 days or not quite 1/2 the year there was water in San Marco Square, one of the lowest points in all of Venice. The tides only need to be 90cm – about 36 inches for the water to start seeping into the square where it bubble up in the low spots.

The Business of Aqua Alta: 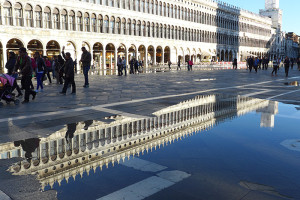 Venetians, ever adaptable, began advertising high-end vacation packages complete with plastic stivali (boots), tide charts and maps to help you know when and where to find the highest water, encouraging tourist to enjoy Venice with a romantic wade through the streets. Venetian merchants have taken the proverbial lemon and made lemonade, turning the focus to this phenomenon where people happily wade through the murky water as a romantic insight into the city. Imagine standing in your favorite bar in 6 inches of water, listening to the barista sloshing around the bar making your cappuccino and eating your morning pastry. This is an all too familiar occurrence in Venice. 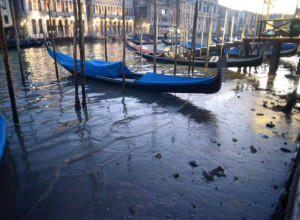 TOO LOW FOR GONDOLA RIDES

But… on Sunday 4 January 2015 the unusual occurred, even with a full moon which generally leads to higher tides – the tides went out and left the city high and dry! With a minus tide of -98, navigation was difficult and boats were left hanging to their moorings. Tourist wanting gondola rides were disappointed as the small canals were completely dry in smaller canals. Some vaporetto stops and routes had to be abandoned for the couple hours because they couldn’t get through or close enough to the vaporetto stop for passengers to embark. This record low tide was yet another photo moment for tourist, who needed those plastic boots to get to the gondola.

WOULD BE THIEF STUCK IN THE MUD!

It does have its humorous side. It seems a would be robber stole a boat from the island of Burano. But lacking the forethought of checking the tides or even the rudimentary skills and knowledge of the lagoon, he was soon sitting on the muddy shoals high and somewhat dry. And there he remained imprisoned in the small boat until the police arrived to take him away. Since he was going nowhere, they attended to more critical problems around the islands while he languished in his on little prison a short distance from the scene of his crime. A just punishment if ever there was one.

Below are a few pictures of how it looked, and in case you wanted to know what’s at the bottom of the canals, you missed your chance. 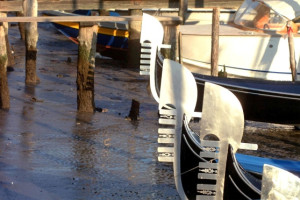 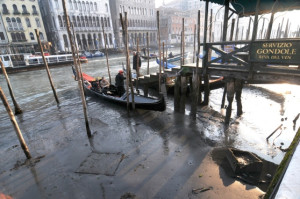 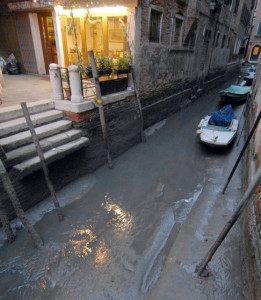 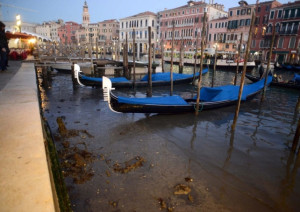 Some pictures by Nuova Venezia, some our own photos.