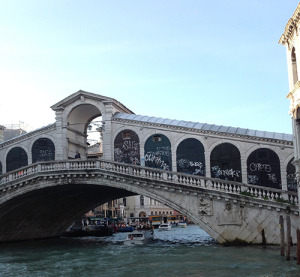 The Rialto Bridge is one of the most recognizable places in the world and is sadly often marred by graffiti. As seen in pictures from a couple of years, the shutters are covered in scribblings. Sometimes declarations of love, sometimes rants and most often random words.

We usually suspect teens as the culprits, though there are some who view graffiti as an art, it hardly can be called art when it defaces historic buildings and structures like the Rialto Bridge. It is vandalism and often by youngsters from countries from all over the world. Imagine what the Council of Ten* would do with these ruffians! 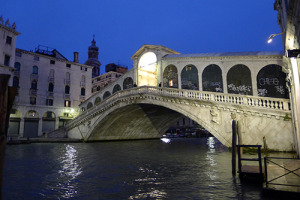 So enter the citizens of Venice along with the merchants who occupy the shops whose entrances are along the steps. For the second year, they have come together to clean this beautiful bridge. The first year there were only 5 but this year the number grew to 200 locals who are tired of seeing their beloved city abused, added by the merchants who spent about 22,000 Euro to paint over the scribbling.

Enjoy this graffiti free view of the Rialto, because the vandals have their spray cans already aimed on these old timbers. 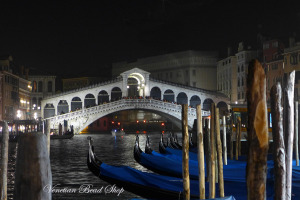 *Council of Ten: From 1310 to 1797 was in charge of security of the Republic of Venice, vice and known for it’s unlimited authority, secretive and swift punishments.

← Venice Through Google Glass
Made in China – “Duplitecture” →