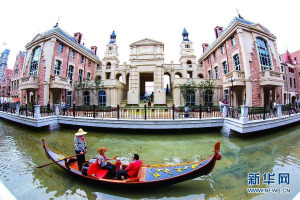 They say that copying is the sincerest form of flattery and since Las Vegas and Macau have already successfully build replicas of Venice, China was a little behind – but they have just opened “Venice of the East”.  But no it has an actual name according to Bianca Bosker, author of Original ­Copies: ­Architectural Mimicry in ­Contemporary China, calls the phenomenon ‘duplitecture’. She argues that in mimicry is seen as ‘a form of mastery’ in China – i.e., Made in China! and in amazing detail. 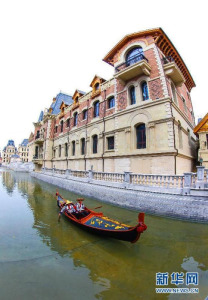 Quoting from China’s own government portal “Visitors enjoy boat tour on an artificial river at a scenic spot featuring landscape similar to that of the “City of Water “–Venice in Dalian, Liaoning province on Sunday, October 19, 2014. With an investment of five billion yuan ($816 million), the European-style tourist project is set up along an artificial canal, and covers an area of 400,000 square meters. [Photo/ Xinhua]” 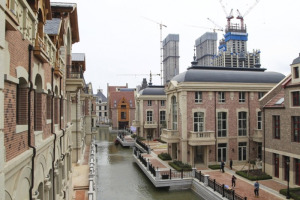 It is just the latest example of China’s new  city creations – replicating Europe’s western architecture: Hangzhou has its own‘Eiffel Tower’, and Chengdu has recreated the town of Dorchester while Shanghai’s creation of Thames Town comes complete with red phone boxes and a statue of Winston Churchill.

In 2012 the world learned that China had built a replica of the Austrian alpine village of Hallstatt, a Unesco World Heritage site, in Guangdong, which upset some people in Austria. 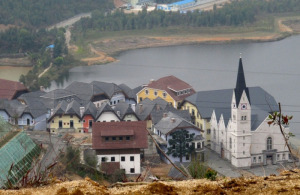 But it appears that even the copycat Venice has its own acqua alta (high water) problems. The canals will have water only to the middle of this November due to the weather. I am assuming they mean it will be very rainy? Maybe they need to build a Moses?  (Good luck with that!)

← Rialto Bridge – No Graffiti – Cleaned by Venetians
Could you be a Venetian? →