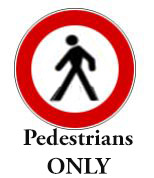 Attention: Google, GPS, Yahoo, All Navigation Devices, you need to update the maps for Venice clearly marking where CARS stop and FEET start! Apparently blindly following your directions another tourist has driven off road and nearly into a canal in Venice, plus rewarded them with a Ticket!

Again this week a tourist arriving at Piazzale Roma (see map below), drove right past the standing buses, taxis, kiosks and people and down the Fondamenta, only stopping when clearly there was nowhere to go and the arrival of the police. Maybe I sympathize a little more with this one as some delivery trucks are allowed to this area.

However, People! In Piazzale Roma, there is only a car park and a circle to return back to the mainland. There are no short cuts to your hotel, not to the vaporetto, not to the bar. The only short cut is you being instantly put on youtube or facebook displaying your inept driving skills and logic. 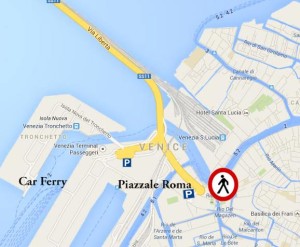 Maybe it’s confusing if you wanted to take your car to the Lido, where cars are permitted. However in that case you need to drive to Tronchetto where the Car Ferry docks, in this case follow the signs “Ferry”. Look at the map. The 2 yellow lines are the only places cars are permitted in Venice. At the end of each of these lines, you can find parking, sometimes. But if it’s heavy tourist season, like August, Redentore, Carnevale or any other festival, it’s full well before noon. A car simply isn’t a good option for arriving in Venice. If it is a rental, drop it off and leave the driving to the vaporetto.

The week before French tourists drove through the barriers and down to the canal which leads to the Giudecca Channel. Stopping only when it was impossible to go further on the waters edge. They, too, received a warm reception from the local police and were featured in a video shortly.

So if you are headed to Italy, here’s a few road signs you’ll need to know. The Auto Drivers Club has a list translated into English, and there’s more info there as well. So print it out. The one of the Pedestrians, I made up – but it is sorely needed in Venice. 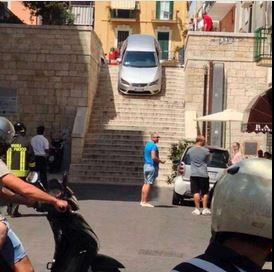 And, apparently this navagation “blindness” is not confined to Venice. In Bari, in the south of Italy, this Australian tourist made a turn right down the steps. Bet he had some explaining to do with the rental car company who had to have help to remove it.

Can you imagine the conversations (yelling) inside these cars? Forget that romantic weekend!