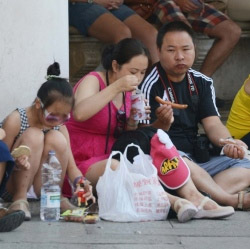 Every year as August rolls around, Venice is inundated with tourist of every age, gender and ethnic background, bringing with them their own mores, social behaviors or often lack thereof. It’s difficult to cross bridges or exit your house as the steps are laden with tourists like these Chinese (Photo: Il Gazzettino) having their snacks sitting as you see here, flat on the sidewalk.  And last week, a Filipino family pulled their suitcase right into the Piazzetta dei Leoncini, opened it up and proceeded to produce everything needed for a family picnic, too bad there were no tables. Or the Indian family who decided to cook their lunch on a camp stove right in San Marco (never mind this city fears fire like no other!).

By mid August the locals are fed up, even though so much of their economy depends on tourism. And from this summer, they have every right. 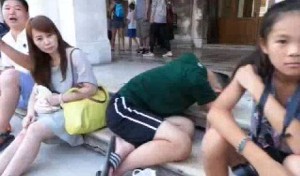 The lines for the vaporetto, indeed for even purchasing a ticket to the vaporetto are long and patience is running thin. Trying to board the vaporetto is even more difficult as the tourist clog the entrances and exits like lemmings on their way to extinction, and the locals, cannot board. The elderly Venetians, on their way to the doctor, grocery shopping, or poste are smothered in the crowds. Once on board, tourists and locals alike do not have an improvement in behavior and tempers flair.

We witnessed an elderly Venetian give a swat to a young, obviously drunk tourist who ran over the ladies foot with her suitcase the size of a small car.

The headlines in Il Gazzettino read: “Venice waves the White Flag” in surrender to an estimated 25 million tourist this year. Solutions for this overcrowding, lack of facilities and lack of respect for this beautiful old lady of a city vary from limiting the number of tourist allowed in any one day to requiring a admittance card and reservations. Their was even a discussion last year of creating a pretend Venice on the mainland just for tourist – much like a Disneyworld.

The average tourist in Venice spends less than 4 hours there, they are interested in their “bucket-list” for Venice, quick photos of the following: Rialto Bridge, San Marco Square, maybe San Marco the cathedral, and maybe Murano. The eat a sandwich or ice cream, maybe a cappuccino and they are back on the bus or boat, having “seen” Venice. And bluntly put, these tourist do not compensate for the trouble, trash, and bad behavior they bring with them. 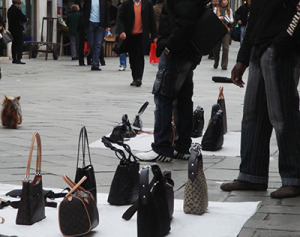 Fake Purses Can Get you Fined

And it’s not only the tourists, the influx of illegal street vendors has engulfed every bridge, square, and corner. They have become aggressive, unrelenting in their pursuit, though I do marvel at how many languages they can speak and how fast they can pack up and leave when the police head their way. The ones that are really annoying are those with those blasted toys they launch which glow. There are so many of them San Marco doesn’t need  lamp poles and you can’t make a picture without one zooming through.

The car parks at Tronchetto and Piazzale Roma have been completely full well before noon, owing in part to the weather  this year as the beaches are not as appealing in the rain, so on a rainy day – visit Venice? And, if the sun comes out, you can do what these young tourist did,(Photo: Il Gazzettino) just lay on the stones in front of San Marco alongside the Gondoliere stand in swim suits and sunbath, where I do not think even a Doge has had the nerve to worship the sun. I cannot imagine the confidence this must take, oblivious of the thousands of people strolling by. 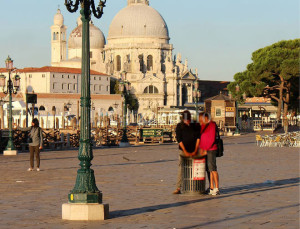 This year, it seems that the tourist have sunk to hither before unheard of depths. This picture ran in both Il Gazzettino and Nuova Venezia deploring the two young men who simply urinated in the trash cans in San Marco Square in plain view and daylight. (Photo: Il Gazzettino)  In previous days, this could have resulted in a trip over the Bridge of Sighs and a long visit to the prison in the Doges palace.

Some of our friends woke up one morning to find a pup tent alongside their house. And while I would love to spend the night at the Doges Palace, sleeping on the benches outside is not my idea of a vacation. A novel way to beat the high cost of hotels in Venice! But Really!

Some of the more vulgar displays of humanity I will skip here, but suffice to say that Venice has seen it all this summer, and I do mean all. From using the city as a toilet, bedroom, yes it is a romantic city. But some things are better left to your hotel room (that is if you have one??). 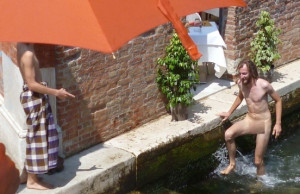 Earlier in in August two men took a splash in the canal near the Billa grocery store on Strada Nuova sans anything – that’s right completely nude, these two grown men bathed in the lagoon. (Photo: Il Gazzettino) And yes, that is a restaurant behind them. There were definitely items not on the menu that day They were led away by the police. But perhaps there’s no written law about swimming nude in Venice.

After all, we never thought it was needed. But this year, it is apparent that we need many new laws.

Remember your manners….. What would your mother think?

← Where Cars Stop and Feet Start!
More Twists and Turns in the Venice Cruise Ships →

8 comments for “It’s August and the Tourist are Unruly”