Headlines from NuovaVenezia: NO Big Ships! 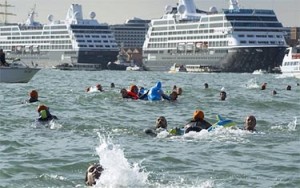 An international appeal was launched by the Committees for the Protection of Venice – a member of the Joint Program of UNESCO, and was signed by 63 icons – personalities of culture, business, fashion and architecture addressed to the Prime Minister Matteo Renzi and to the Minister of Culture, Dario Franceschini to permanently prevent the traffic of large ships from Saint Mark’s Basin and the Giudecca Canal, putting an end to what is called a “monstrous spectacle that every day is staged in Venice.” Among the signatures illustrious names from the worlds of culture, film, fashion, literature and architecture. These include Norman Foster, Cate Blanchet, Calvin Klein, Nobel laureate Vidia Naipaul, James Ivory, Susan Sarandon and Jane Fonda, SAVE Venice, and others. This is the text of the letter: 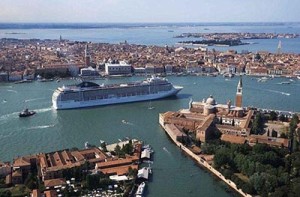 Ships the Size of Islands

“Prime Minister of the Republic of Italy, Dr. Matteo Renzi and the Minister of Heritage and Culture and Tourism of the Republic of Italy, Dario Franceschini, For more than 13 centuries, Venice has survived floods, plagues and wars, and now in times of peace, the Queen of the Adriatic, declared World Heritage by UNESCO, is likely to be overwhelmed by the enormous ocean liners, which cross daily, indifferent to the possible risk that their passage implies. The flood of 1966, together with the Italian State, hundreds of supporters Italian but also international, with generosity and passion have contributed to the preservation of a unique city in the world, but also very fragile from the point of view of the preservation of the historical and artistic heritage. We ask to be addressed urgently the problem of the passage of the Great Vessels in St. Mark’s Basin and the Giudecca Canal, putting an end to this mess that always touches the heart of Venice. We ask for your attention to this appeal that unites around the world who love this city! Umberto Marcello del Majno, president of the Association of International Private Committees for the Safeguarding of Venice, a member of the Joint Unesco

Two and half years after the tragedy of Giglio, these options are still on the table with no resolution. Now with no viable government in Venice as a result of the scandal of MOSE (which has incriminated so may elected officials) getting a decision is further hampered. 1)     There is the excavation of the new channel Twisted requested by the Port, 2)     The new channel behind the Giudecca (VTP and Undersecretary Zanetti), 3)     the hypothesis Marghera for the huge ships, advanced by the City, with the ability to get to the Maritime digging the canal Vittorio Emanuele. 4)     And finally, the solutions of the port “out of the lagoon,” the hypothesis Roar, Claut and De Piccoli asking to move the terminal to the Lido carrying cruise passengers with medium to large boats. There are many facets to this problem, the politicans, the cruise industry, the port authority, and the many citizens of Venice who make their living serving the cruise lines. As you can see it all revolves around money!

But who speaks for Venice?

It is very complicated balancing the livelihood of citizens against the protection of this magical city, where they had the good fortune to be born. But what of their children if the city is ruined? Where will they work? Live?

4 comments for “Who speaks for Venice?”