Osteria Senza Oste but complete with Domatore
It begins in a small village in the Prosecco district of the Veneto (about 50km from Venice) situated in the very heart of the grape vines which produce the acclaimed Prosecco of Valdobbiadene. Amidst the valleys and hills lined with rows of the grape on a small dirt and gravel path is the incredible “Osteria Senza Oste”, which literally means a Tavern, without a Host. An osteria is a bar which serves simple food and local wines. It is one of the oldest types of eatery in Italy, with an Osteria in Bologna which dates back to the 14th Century. In earlier days, the Osteria often offered only wine with the guest bringing their own food. Today, an osteria serves local specialties, in a simple but very warm atmosphere and there are several very good ones right inside Venice.

A Well-Beaten Path
This rustic Osteria happens to be in the shadow of one of our favorite wineries and we had seen it on previous visits, we had never visited. But last fall on a whim we took off the dirt trail to this inviting terrace high on the hills overlooking the Cartizze vineyards. The building of stacked stones is in the classic farm house of the region with a shelter for the animals attached to the house, where they were kept during the winter. Got Milk?
As we got nearer, a cow along with her baby calf were in a stall and a donkey in another stall, both lined with beautiful straw and hay.

Against the opposite stone wall, an abundant supply of neatly stacked, freshly cut firewood awaited. The door stood open and a warm fire crackled inside the simple house. A old, large and obviously well used kitchen table, with the customary oil table cloth,  was at the center of the room with small cabinets on the side. A ladder led to the upstairs loft, which really looked inviting.

Cards from Around the World
On the wall was thousands of business cards, post cards and notes. Completely entranced, I fumbled through my purse and placed the VenetianBeadShop.com card alongside those from all around the world. 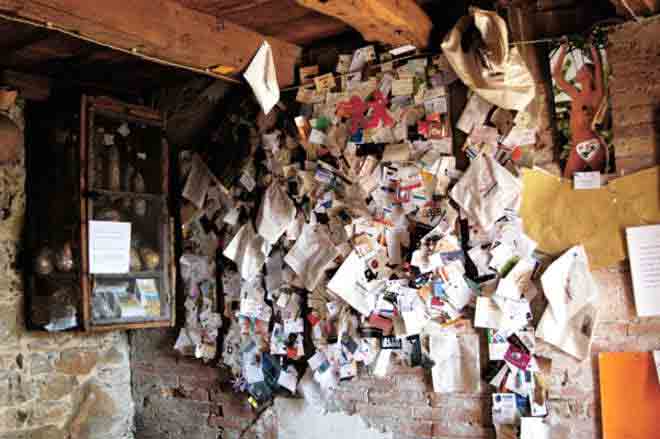 Complete with Dormatore dei Leoni
Then I spotted the gentleman sitting in his wheelchair and greeted him. In this region, they speak the Fruili version of Veneziana so my friends from Venice were not sure I could communicate. But he spoke Italian with a slightly German accent. When he discovered we were from the San Francisco area, he immediately began with his story. He has a son who lives in San Francisco, a doctor whom he has not seen for years. (This proves the world is a small place). 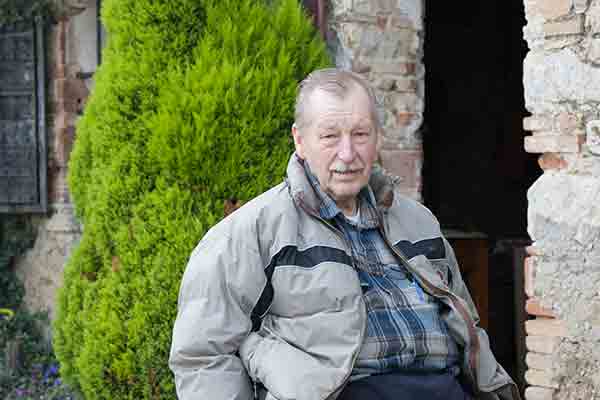 He has a tragic story as he is a diabetic with many problems, including recent surgery and the loss of his wife and children. But he is very proud of his career with the circus. Yes the circus as a “domatore dei leoni” (lion tamer), a couple of missing fingers left no doubt as to his profession. He had traveled extensively with a number of circus troops in the US, all over Europe and beyond. He entertained us with stories about his life and the circus. The stories were entrancing and a small view into a different world. He is not the owner of this quaint spot, he just spends his time at the cottage to meet people and to pass the time as he is retired. He lives in another small village a mile or so away with a population of under 100. Innocent Place OR Tax Evader?
It seemed such an idyllic place, you could sit at the table, take a glass of wine, eat a slice of prosciutto or local salami, leave your money in the piggy bank. Stay as long as you like, talk to the other people who wandered along the path. Sit on the terrace and look across the peaceful valley. People spoke to each other, how lovely, a cafe where everyone seemed to be free to enjoy, I think you’ll agree, the scenery is magnificent. It’s popularity spread only by word of mouth. It seems from another era. We all commented on how this kind of place could only exist in Italy. Does this look like a Menu?
Well then the Italian Guardia di Finance, of Montebelluno decided to assert their power. This proves the old saying that “no good dead goes unpunished”. The Osteria, received a notice from the local government to close. It seems that whether or not you are in business to make money, you must have a proper permit and pay taxes. Though I seriously doubt they ever made any profit, with the average suggested price of .5 Euro – it will take lots of eggs to make a living.  However, the evidence as shown here of the little cards with suggested prices, is enough for the tax police.

Il Gazzettino & Nuova Venezia
The local papers published this insanity and a chorus of protest from all over Italy, and the world began pouring in. And a few hours later the new facebook site called “L’osteria Senz’oste Non Deve Chiudere“_or basically “You can’t close the Osteria” was alive and had over 4,000 friends in the first 24 hours, naturally we were among those who think it is shameful to close an establishment who makes no money, survives on the generosity of humans who can either give a donation or not and no one is there to collect the money. But clearly, there must be several rules broken here and the bureaucracy must prevail….NO

You can read (google can translate) all the article, and comments at the following webpages. And please join the Facebook plea for leniency for this place: Click Here to Visit FaceBook Page