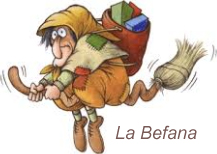 Epiphany is celebrated in various ways across Italy following folklore and traditions. The most famous is La Befana, an old woman who delivers gifts on the 5th of January to good children, filling their socks with presents. Bad children get lumps of coal.

You can find these “lumps of coal” for sale in all candy stores a sugary confection. These lumps are rock candy colored black. La Befana rides a broom and it is traditional for her to sweep the floor before she leaves. The sweeping signifies to many sweeping away the problems of the year. 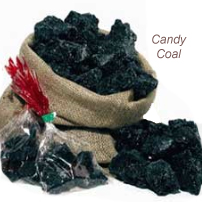 Much of this is similar to the visits of Santa Claus just on different days. She, like Santa, arrives through the chimney and has a bag stuffed full of goodies. Unlike Santa, whom we all know is a jolly old man with white hair and a beard, La Befana takes on different characteristics. Everyone generally agrees she has a long crooked nose, broken shoes, tattered clothes and rides a broom. She does not appear in malls to have her picture made.

In some cities, La Befana is celebrated by burning a figure of the generous woman bearings gifts. In Treviso (just outside Venice) and surrounding communities, the bonfire and celebration carry the name Panevin and is a symbolic destruction of the past year’s misfortunes  and the rising of the sparks and smoke are hopes of the future. Pliers, yes pliers, and mulled wine are distributed. 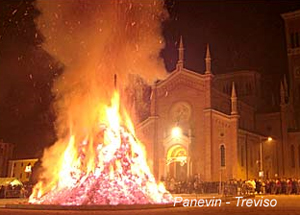 How this ties in with Epiphany? Legend in Italy is that when the Three Wise Men were in search of the newborn, they stopped at a house of this wonderful housekeeper (hence the broom) and stayed the night. The house was that of La Befana. They asked her to journey with them but she did not accept their invitation because she was so busy with her housework. Later she rethought and wanted to accompany them, however, she did not know where they were going. So she visits the homes each year still in search of the newborn.

For the day of Epiphany, 6 January, the celebrations are rooted in the Catholic Church and it is viewed as a Holy Day with traditional services and family celebrations.

The day after?  We hope everyone returns to work!

← Cappuccino, Is it Really That Hard to Make?
There’s an App for Venice →